Reacher “Just Happens” to be at it again

Bob Moyer reviews the latest in one of his favorite series (and one of mine, also, once he introduced me to it). But, as he explains, this involves a “new Jack Reacher.” 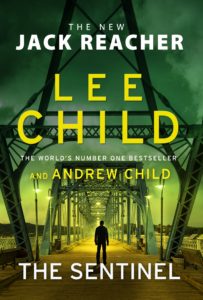 And so it goes in the latest installment, The Sentinel. Reacher stops off in a small Tennessee town, and on his way to get coffee always) he Just Happens to notice five people about to attack a clueless man. He adds a few mangled bodies to the pile he’s created over the years, and after a visit to the police station, he goes back for that cup of coffee—and Just Happens to run into the guy he saved. It turns out he’s the disgraced town IT guy, who is blamed for the town’s IT structure being held for ransom. He doesn’t know why anyone would want to kidnap him, but Jack senses he’s in danger.

In the meantime, while Jack and the guy are trying to scope out what anyone could be after, nefarious foreign forces still plan to kidnap him. By this time, it Just Happens that Reacher has decided to stay to protect the guy and his mother. Reacher sets out to set up traps, trying to find out what “they” are after. Shortly, he figures out it’s something on the servers that were held up in the ransom. The IT guy, unfortunately, threw them away. Now they are looking for something they don’t know on something they can’t find. And a bunch of bad guys are after them. Of course it Just Happens that a couple of FBI agents let Reacher know that it all revolves around a threat to national security, a program called The Sentinel. The plot plays out with the usual mangling of bodies, threats to Jack and his cohorts, and, in this case, with Reacher going literally deeper than he’s ever gone.

Two changes about the series must be noted. For the first time in 25 volumes—wait for it—Reacher gets a cell phone. It’s a text-and-talk model, and he gives it back at the end. It’s a temporary change.

The other change is permanent. Lee Child is giving the series over to his brother Andrew. The result here, if any example, reads slower and longer, with more people than it feels like necessary. Time will tell, however. Let’s hope, that like Ace Atkins taking over Robert B. Parker’s Spenser, that Brother Child will master the art  of the Just Happens School of Mystery Fiction.

This entry was posted in Mysteries, Popular fiction, Thriller/Suspense and tagged Lee Chlld, Reacher, The Sentinel, thrillers. Bookmark the permalink.