The most important client

Bob Moyer has a way of making we want to get a book and start reading right away! This one sounds particularly good. 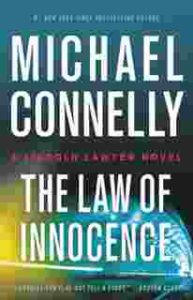 Mickey Haller is the Lincoln lawyer. He does most of his business in the back of a chauffeured Lincoln, much of that business with people who are guilty. He is to defense lawyers what his half-brother Harry Bosch is to detectives—the best. Haller thinks of the prosecution as a solid, deep-rooted tree; he thinks of himself as “…the man with the axe. My job is to cut the tree down to the ground and burn its wood to ashes.” In this latest installment, he needs a very sharp axe to save the most important client he has ever had —himself.

A few pages into the book the police arrest Haller for murder, the victim a client who owed him money. It’s a frame, of course, but Haller comes up before a D.A. that he has beat like a drum and a judge whose case he overturned. Mickey Haller goes to jail.

And he stays there most of the book. He and his crack team, which includes Bosch, have to put their case together while navigating the limitations of the prison and court system. Michael Connelly’s skill makes that effort most interesting, as we follow the winding ins and outs of the case inside the courtroom and the investigation outside.

They know whodunit early on, but the danger for the case builds. Will they find him? Can they get him to court?  And can Haller himself stay alive inside the jail?  Connelly always builds edge-of-your-seat suspense, but he ups himself here by adding a danger the reader is well aware of, but the book’s cast isn’t for some time —the pandemic. In this early 2020 setting, hints appear—a rumor about a Chinese virus, an incident in a Washington nursing home, masks. It’s interesting that the addition of something we are so familiar with adds dread to the occasion for the reader, not the characters.

After a finely tuned orchestration of incidents, including surprise discoveries, lying witnesses and, of course, the FBI, Haller finally sees the case coming together, the moment he starts “…to get the visions I got before all my trials. Visions of witnesses on the stand, visions of me telling my story.” After the case plays out in court, the story comes to a trademark Connelly double ending. The book is actually longer than most Connelly books, because of The Law of Innocence—as Haller says, “the only way to prove I didn’t do it is to prove who did.” That takes a little time, and the reader gets to tag along on another Connelly triumph.