Who we are, who we become

Bob Moyer is right on with his review of this well-written novel. Coincidentally (sorry, Bob, I couldn’t resist), I read it recently for the book club I participate in here in Currituck, North Carolina. The Vanishing Half inspired some lively discussions. 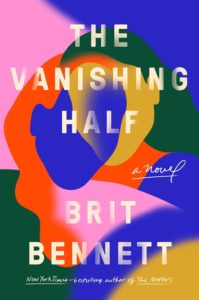 From the pen of a great, even a good writer, it can open new vistas, extend the narrative, bring storylines together, and wreak magic on the reader. If not handled skillfully, however, it can push the reader right off the page. People have asked me frequently why I rarely publish a negative review. I stop reading if it doesn’t appeal to me, or, in my most recent drop, I can’t believe the premise. In a book listed for the Man Booker prize, the author created such an outrageous coincidence central to the narrative that I couldn’t possibly continue.

Britt Bennett depends upon coincidence in her accomplished book, The Vanishing Half. It is the weakest link in an otherwise sterling novel about light-skinned black twins from Mallard, Louisiana. The social hierarchy of this small, black community depends upon the skin tone. Light-skinned as they are, Desiree and Stella still escape from town one night. Soon after, Stella escapes again — across the line from black to white, as we later learn.

Desiree does not. She marries an African-American man, and has a child “as black as tar.”  He turns abusive, and she takes her daughter back to Mallard. There, the child grows up subjected to the cruel caste system inside the black community. She finally escapes to college in Los Angeles.

That’s where the coincidence that stretches credulity comes in. By this time, however, Bennett has reeled us in with some skillful writing. She provides us a tangible connection between the twins, a palpable bond between mothers and daughters, a stark capture of the caste system, and a growing interest in what happened to The Vanishing Half, Stella. Bennett primes us with comments about statistics, ironically Stella’s strength. We accept the coincidence, as the two storylines come together when the “black as tar” daughter meets Stella’s blonde-haired, blue-eyed daughter.

Bennett makes painfully clear that Stella escaped only to a prison of her lies. She has committed so completely to her crossover that she cannot come forth to her daughter. With an eye for detail and an ear for dialogue, Bennett details the nuances of “passing,” and the price Stella and her daughter pay for it.

The playing out of the story is not a happy one for Stella or her daughter. Desiree and her daughter actually escape Mallard into a modicum of normalcy. No magic occurs to resolve the effects of racism here, however. The only magic in this book is the prestidigitation of Bennett’s prose.

This entry was posted in Popular fiction and tagged Brit Bennett, race and caste, The Vanishing Half. Bookmark the permalink.