Bob Moyer is my hero. Undeterred by all that’s going on in the world around us, he keeps  reviewing books so the rest of us will have some idea of what to read when we want some respite. 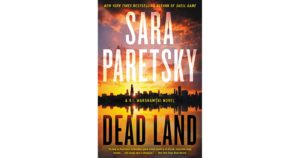 Author Sara Paretsky has provided Vic, as she is known, that perfect trifecta. Attending a community meeting with her goddaughter Bernie, she witnesses an altercation between two committee members, one of them Bernie’s nerdy boyfriend. On the way home, they stop by to check on a once-famous singer, now down on her luck, out on the street. Within hours, the boyfriend is dead, and the singer has disappeared. Vic can’t help herself; she immediately looks into the murder, and tries to find the singer. Before long, she knows something bigger is behind the cases  —her neighbor starts being nice to her.

The woman, a lawyer, has been trying to evict Vic for years. Her law firm wants to find the singer, so she has been instructed to play nice. It seems they represented the murderer of the singer’s boyfriend, the event that sent the woman into a downward spiral. And somehow their interest involves a toy piano the singer plays.

The path Vic follows leads all the way from a proposed development on the Chicago lakeshore to the days of the “disappeared” in Pinochet’s Chile. In her search, she falls down a cliff face, is shot at and is threatened by the head of a city agency. At the bottom of it all is the simple truth behind much of Chicago politics:  “Pay to Play.”

Inexorably steely in spite of her wounds and threats, Vic exposes the rotten underbelly of Chicago’s politics. She gets help from her colleague, journalist Murray Ryerson, and, of course, her neighbor Mr. Contreras. Along the way, she  (and the reader) gets to spend time with Bear, a key character’s dog. Somehow, her commitment to that dog brings more depth to the story than one would expect. This time around, Vic shows a vulnerability greater than before, complementing her stellar capacities as a detective. Dead Land is a highlight in this venerable series.