An American in Paris – surrounded by Nazis 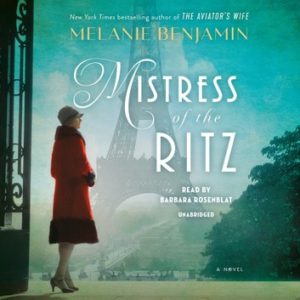 Melanie Benjamin’s trademark gift is to take real historical people and events and carefully translate them into well-crafted fiction that comes alive with dialogue and day-to day action and emotion. She takes that rich blend to new heights in this fascinating, suspenseful historical novel about Blanche Auzello and her husband Claude, the mistress and master of the famed Ritz hotel in Paris during the terrible years of the Nazi occupation in World War II.

In such previous triumphs as Alice I Have Been, The Swans of Fifth Avenue, The Aviator’s Wife and The Girls in the Picture, Benjamin has been able to draw on a wealth of material about her subjects.

This time, as she explains in an author’s note, she had little to draw on beyond the bare facts. Thus, she says, this story if “inspired by” rather than “based on” actual history.

“Inspired” is a good word to describe Mistress of the Ritz. Benjamin has taken those bare facts, a great deal of research about occupied Paris, her fascination with the glamorous Ritz – which becomes a character in its own right — and informed imaginings about what might go on in an unconventional marriage in challenging circumstances and produced a compelling story. It’s immensely entertaining, even while raising important questions about such things as courage, loyalty, patriotism and morality.

Blanche was a pretty American girl whose aspirations to be an actress brought her to Paris in the early 1920s. She was about to be whisked away by an Egyptian prince, but Claude Auzello, a young veteran of the Great War who was working his way up in the hotel business, uncharacteristically fell in love with her and decided to rescue her. They hardly knew each other when they married after a heady, dramatic, romantic series of events.

And then they began to discover how ill suited the ambitious, devil-may-care American girl and the old-fashioned, proper Frenchman were.

But even if often stormy, their lives were also charmed, at least in the early years. Claude won the coveted job of manager of the Ritz, and the Auzellos soon moved into a suite there. The glamour and ease of life at the Ritz, where Blanche could hobnob in the bar with the likes of Hemingway, Fitzgerald, Coco Chanel and the Duke and Duchess of Windsor, insulated them from reality.

But when the German Army took Paris and the Nazis commandeered the Ritz as their headquarters, reality intruded in a harsh way.

Claude and Blanche struggle to deal with the Nazis while protecting themselves and Claude’s beloved Ritz. Secrets have long caused strains in their marriage, and now there are new and more dangerous secrets.

After D Day, as the American Army advances and the Nazis feel desperation, the Auzellos’ circumstances grow ever more dire. Will they survive the war, and if they do, will their marriage finally crumble — or somehow grow stronger?

Love, suspense, humor, history viewed from a fresh perspective and very personal questions about what to do when the forces of evil take over a beloved country – Mistress of the Ritz has much to offer.

Barbara Rosenblat is wonderful as the reader for the audio version. Her voice and tone are just right, especially for Blanche, the brash, impulsive American who finds herself in Paris during its darkest hours.