A lot about a lot

Bob’s back! Actually, Bob Moyer wrote this review before he took off on his recent travels, but it got buried in my email. Check back soon for reviews Bob has written since his return. 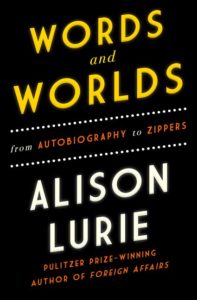 Alison Lurie has written a lot about — a lot. In her long career, she has to her credit numerous articles, essays and novels, including Foreign Affairs, which won the Pulitzer Prize. She writes engagingly about interesting subjects; this book, subtitled From Autobiography To Zippers,  represents her skill, catholicity and longevity emphatically.

Longevity is key here. Lurie doesn’t hesitate to date herself in the service of a subject . She drags us back to “Their Harvard,” where she was a second-class student from the all-women’s college Radcliffe. She takes no position, but she pointedly cites the many raised female hands that were ignored, and the many professors who ignored them. In a section labeled “Clothing,” she regales us with the history of “Aprons,” and adds the personal touch of the aprons she wore as a ’50s’ housewife. With great abandon, she revels in “Life After Fashion” for her and other women of a certain age, who can wear what they darn well please.

Her writing, however, is not the least dated. A lengthy piece that outlines “What Happened in Hamlet” simply sparkles through the years. Her wide-eyed wonder and nose for detail bring a London production of Hamlet alive long after the ’70s’ production she covered. Her pieces about people she knew, even if we don’t, all have a marked poignancy, particularly the one about the book artist Edward Gorey. She knew him as Ted.

Particularly pertinent are her essays derived from her depth of knowledge about children’s literature. She brings “Rapunzel: The Girl In The Tower” into the #ME TOO era, and takes on Trumpian overtones in “Harry Potter Revisited. “

Not all of the subjects of these 21 essays may interest you, but what Lurie has to say about them will. Alison Lurie knows how to write, even though someone tells her in an essay “You Don’t Have To Write A Novel,” or anything else. Fortunately, she didn’t listen then, or now.

This entry was posted in Autobiography, Contemporary Nonfiction, Essays and tagged Alison Lurie, Essays, Words and Worlds. Bookmark the permalink.