Back from the dead

I’m catching up with all the reviews Bob Moyer sent we when he was catching up. And now you can catch up on your pleasurable reading.

ONLY TO SLEEP. A Philip Marlowe Novel. By Lawrence Osborne. Hogarth. 256 pages. $26. 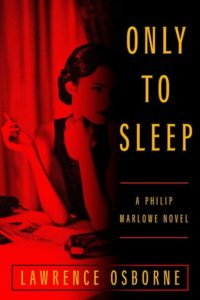 The world’s oldest hard-boiled detective is alive and living between the covers of this book, thanks to the Raymond Chandler estate. They commissioned Lawrence Osborne, no slouch as an author himself, to bring Philip Marlowe back. In Osborne’s conceit, it is 1988, and Marlowe is 72 (using a formula derived from Chandler’s notes and books). He’s retired to Mexico, whiling away his days in a hotel bar. Then an insurance company approaches him to find out if the dead man for whom they paid out a fortune is really dead. Marlowe takes the case, reasoning, “You could call it the imperative to go out with full-tilt trumpets and gunshots instead of the quietly desperate sound of a hospital ventilator.”

As he tracks down the “truth,” Marlowe travels through the same melancholic, metaphor-filled landscape that Chandler always sent him into. Everywhere he turns, he sees his mortality reflected, his hands in the sun “…a fossil alone in his little rock bed, curled up as if ready for the eons. As sidelined as the old Pacific Electric Red Cars that used to plow their way across West Hollywood.” He interviews a man whose hair was “… spun finely … and then dyed to the color of an eggplant after a fair amount of stir frying.”  A hotel owner has “… a broken nose, and the bright eyes of the ones who will never die easily.”

When he meets the dame who inherited the “dead” man’s money, he decides she “… wasn’t an Able Grable, and she wasn’t a cheap muffin looking for easy money either.”  Although he claims his “… pilot light had long been blown out,” he takes to her while taking after her husband, who is a “drip” but not dread.

Osborne moves Marlowe through the same dream-like, surreal plot that Chandler excelled at. In a cavernous hotel room, “Through my sleep moved old monsters and charlatans. The men beaten in alleyways decades ago, the women resigned to their twilight.” When confronted with danger, he “…felt no fear whatever. When a man can already see his end the means of passing through it don’t matter that much.”  He doesn’t hesitate to keep drinking:  “I grow old, I grow old, I will take my tequila bold.”

When he finally decides what to do, whether to side with the dead man or the insurance company, it all comes down to the cash — and the dame. He sees her one last time, and realizes “She was the only thread I was handling as I groped my way through the dark on my small and wind-swept odyssey.”

Osborne has taken a “perilous presumption,” as he points out in an afterword —“stepping into the mind of one of (Chandler’s) characters.”  The gamble pays off admirably in this worthy sequel.