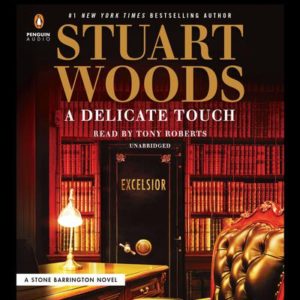 When Stuart Woods is good, he’s really quite good, but sometimes he seems to be just cranking out yet another Stone Barrington ode to the joys of being ridiculously wealthy.

A Delicate Touch, No. 48 in the series (which started in 1991), is better than most of Barrington’s recent adventures. In fact, it’s timely and entertaining.

As fans will know, Stone Barrington is a very, very rich New York lawyer who used to be a cop. Woods’ stories about him are over the top descriptions of what it’s like to use unlimited funds to live extremely well. Imagine having more money than you can spend, a private airplane (or is it two?), a large yacht and multiple lavish homes here and there around the globe. Oh, and to fill out the fantasy, you’re a good-looking man who has multiple beautiful, sophisticated women eager to have sex with you when it suits your busy schedule, with no permanent strings attached. And these aren’t just any women. They are high-powered politicians, journalists and other urbane women of the world. It’s all very civilized, of course.

The main problem for some of us readers is that the Stone Barrington books are supposed to fall in the suspense/mystery genre, and sometimes in recent books, the only suspense is how much more conspicuous Barrington’s consumption can get. In some of the novels, the tales of bedroom antics and the jet-setting lifestyle are pretty much all Woods offers. Sometimes, the story is awfully thin. It all gets a bit old.

But not this time.

It all starts when a friend, the ex-wife of Stone’s good friend Dino Bacchetti, the police commissioner of New York, asks Stone for help opening a large, old-fashioned safe she found in the library of her late father’s home. She’s about to sell the house, and she needs to deal with the safe in a hurry.

Of course, Stone has someone who can help her, and the safe is opened to reveal lots of money and some very interesting – and potentially dangerous – files.

What follows is a story that could be right out of today’s headlines. Among the papers in the safe are incriminating accounts of some of the city’s most dangerous mob-related criminals. Some of these people have gone to great lengths to erase their family’s notorious history, changing their names and creating a façade of successful, upstanding citizens.

The scion of one of these families is poised to run for president of the United States as an independent, against one of Stone’s many well-connected love interests, Secretary of State Holly Barker.

Stone’s possession of the files puts him and others in danger, but he and an intrepid New York Times investigative reporter (who is, of course, a sexy and willing woman) and others in his circle are determined to do the right thing and expose the villains.

Even when they have some substance, Woods’ novels are light, fast-paced fare, well suited to audio books. And Tony Roberts does an outstanding job of reading with a straight face,  er ,,, voice.