If you’re looking for a fictional change of pace, and want a heroine who’s definitely not like the girl next door, Carol K. Carr’s debut novel may be just your cup of tea – or perhaps, more aptly, your glass of whiskey. 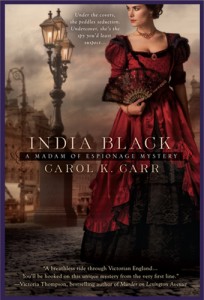 India Black is nothing if not original. She’s sassy, witty, irreverent and smart. She’s also a madam, the proprietor of Lotus House, a classy whorehouse in 1876 London. She caters to gentlemen, thank you, not the common riffraff. She runs a classy establishment, with fine wines, elegant décor and Cuban cigars. Her “bints” are young, refined and discreet. One of her biggest problems is dealing with the clergymen who are so apparently determined to save her errant employees.

If you can get past the idea that she runs a whorehouse, India is a very appealing character. And it’s not difficult to get past that potential stumbling block if you read the novel in the spirit in which it is written. It is light, entertaining, stylish and clever.

India does not dwell on how and why she got her start in the ancient profession, or what her days and nights as a practicing whore were like. She just breezily tells us that she “got out of the game years ago, preferring to herd my own flock of tarts than waste my youth and good looks servicing an assortment of randy gentlemen.” She could probably earn her living in easier ways, she concedes, perhaps by being some rich man’s kept woman, but she prefers the freedom that running her own business provides.

All is going well for India until the night when Sir Archibald Latham of the War Office inconsiderately dies of a heart attack while being “entertained” at Lotus House. India knows that a scandal could doom her business.

Unfortunately, she is spotted while trying to smuggle Sir Archibald’s body out of her establishment.  And it’s not just anybody who sees her – it’s a British spy, and a young, handsome British spy to boot. It seems that Sir Archibald had some highly sensitive papers on him, and the Russians want the papers as badly as the Brits do.

What ensues is a lively cloak-and-dagger adventure made more interesting by India’s spunk and dry humor. The hint of romance between the lovely madam and the handsome spy further spices the tale.

This is a highly entertaining change of literary pace. It’s Victorian England viewed from the wrong side of the primly drawn velvet curtains. If I know India Black, we haven’t heard the last of her.

Linda C. Brinson is available for writing and editing projects. You can reach her at lindacbrinson@gmail.com

1 Response to Victorian England as you’ve never seen it