There’s nothing like a murder to make life worth living 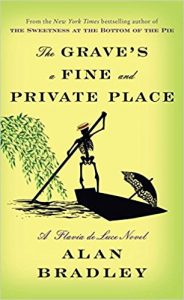 Things are grim in Flavia de Luce’s world. A few months earlier, her father died unexpectedly, leaving Flavia and her two older sisters orphans. Aunt Felicity is determined to sell Buckshaw, the crumbling estate where the family has always lived, even though it now belongs to Flavia. Making matters worse, Aunt Felicity wants to haul Flavia off to London to live with her.

Feeling that they all need a change of scenery and an escape from Aunt Felicity, Dogger, the faithful servant and longtime friend of their father, takes the girls on a rowing holiday. Flavia, the world’s foremost 12-year-old chemist and sleuth, is delighted at the prospect of visiting the village of Volesthorpe, the site of St.-Mildred’s-in-the Marsh church, where the notorious Canon Whitbread had poisoned three female parishioners with communion wine one Sunday morning. How exciting!

Even more exciting, as Flavia absentmindedly trails her hand in the river water, she catches hold of something. At first, she envisions winning fame for landing a prize fish by hand – but then she realizes what she’s gotten hold of is a human head, attached to a body.

Oh, joy! There’s nothing better than a murder to solve to make Flavia feel that life is worth living again after all.

Thus starts what Flavia will come to call “the most complicated case I had ever come across,” and one of the best books in this delightful series. With Dogger’s help, Flavia begins to uncover the village’s secrets. Before long, she will be trying to solve more than one murder, and she will find herself in mortal danger.

Flavia is such an endearing heroine, despite her (often acknowledged) tendency to be something of a brat and a busybody, if doing so suits her purposes. She’s a precocious, very bright girl with an extensive knowledge of chemistry, but she’s also a lonely child.

A fringe benefit of the visit to Volesthorpe is that she makes a friend – a boy who’s the son of the undertaker, and like Flavia, growing up without a mother. He’s a little younger than she, and equally unusual. Another plus is that she and her sister Daffy patch up their differences at least temporarily and join forces.

At book’s end, Flavia is looking forward to the future, something she would have thought impossible just days earlier. And her legions of fans are looking forward also, to the next book chronicling her adventures.

As I’ve written before, these books are so addictive I take a double dose: As soon as the print version is out, I read it, enjoying every nuance of the mystery and quirk of Flavia’s personality. Then I listen to the audio version, savoring small details I missed in my first eager read, but most of all, relishing the wonderful accents and characterizations Jayne Entwistle uses to bring Flavia and family and friends to life.