No. 20: Inspector Rutledge, at his best 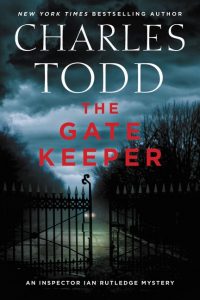 But A Test of Wills, the debut novel, appeared in 1996, and Todd has been producing new volumes with enough regularity to please his many fans. Several years ago, Todd introduced a second series, featuring Bess Crawford, a young British nurse in World War I. (Todd is, we all discovered a few books in, really two people, a mother and son writing team who live on the East Coast of the U.S. but love to travel to England for literary research.)

Inspector Rutledge, as fans well know, suffers from what today would be called Post Traumatic Stress Disorder, lingering emotional and psychological effects stemming from his role as an officer in the Great War. Specifically, the voice of Hamish, a young Scottish corporal whom Rutledge had to execute when he refused to follow a battlefield order to charge into no-man’s land, lives in his head.

Although I loved the first few books in the series, the intrusive voice of Hamish annoyed me at times. Perhaps Rutledge used the device more in the earlier works; perhaps I just got used to the idea. In any event, Hamish’s presence now seems to be an integral and not overdone part of the stories.

Why do I love these books? In part, it’s because of the setting. England in the years after World War I is a fascinating place and time, as the old order, accepted for centuries, seemed to be crumbling all around, and society was adjusting to the devastating loss of many of its young men. Fans of “Downton Abbey” will recognize the time of social and economic upheaval portrayed in these novels. There’s a melancholy that haunts Rutledge even at his best moments, a melancholy that also pervades England after the horrors and loss of the war.

The Inspector Rutledge books are also just good mysteries in the fine tradition of British detective fiction, and Todd sends Rutledge on investigations to an interesting variety of towns and villages.

With any series of this length, some books are more satisfying than others, but even the weaker ones – sometimes the mysteries and cast of characters get a tad confusing – are well worth the read.

The Gate Keeper is one of the better books in an outstanding series.

As the story begins, Rutledge has just given his sister, Frances, away in marriage. What should be a happy occasion is unsettling for him, because through his struggles to adapt to life and his police career after the war, Frances has been one of his anchors. So, rather than just retiring for the night in his London flat after the festivities wind down, Rutledge heads out aimlessly for a long drive in the country.

Miles into the countryside, he’s jolted out of his dark thoughts by the sight of another motorcar stopped in the middle of the road, with a woman in evening dress standing beside it. The woman has blood on her hands, and at her feet is a dead man, a shooting victim.

Thus Rutledge becomes involved in a murder investigation in the village of Wolfpit in Suffolk, over the objections of the local authorities. He successfully convinces Scotland Yard that he should work the case, as he was the first to come upon the scene, but on some level he knows he’s also glad to have a reason to postpone his return to London.

His inquiry into the death of the man, a bookseller named Stephen Wentworth, is anything but clear-cut. The first suspect, the woman whom Wentworth was driving home after a party that lasted well into the night, insists that she is innocent.

Rutledge hears strangely conflicting stories about Wentworth. Most people have nothing but the best to say about him and cannot believe that he would have done anything to provoke a murder. But his own mother, and his former fiancé, describe him very differently.

As Rutledge tries to figure out the truth about Wentworth, and discover anything in his life that might have led someone to lie in wait to shoot him, another man is shot to death – another man who seems to have no enemies.

It’s a difficult puzzle, complicated by deceit, jealousy, greed and vicious, destructive hatred. Rutledge is determined to figure it out. This aspect of life, at least, he ought to be able to make sense of – and, indeed, he does, in fine fashion.