A new entry in one of my all-time favorite mystery series. An added bonus: The author was 70 when the first in the series was published. There’s hope for aging journalists who always wanted to write a novel but were too “busy.” 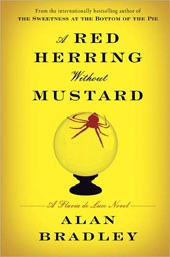 Few things brighten a late-winter day – or any day, for that matter – as surely as the arrival of a new mystery starring the precocious, delightful Flavia de Luce, an intrepid 11-year-old sleuth.

As readers of the Alan Bradley’s two previous books in the series will know, Flavia is an often-lonely child in 1950s England. She lives at Buckshaw, a gently crumbling mansion near the village of Bishop’s Lacey. Her older sisters – Ophelia, better known as Feely, 17, and Daphne, aka Daffy, 13 – apparently live to torture her. Aside from their more physical attacks, the co-tormenters do everything they can to convince their little sister that their mother was driven to her mysterious disappearance/death in a climbing accident in Tibet because she couldn’t stand being around baby Flavia. Meanwhile, the girls’ father, unable to cope with the loss of his beloved wife, the wonderful Harriet, spends most of his time poring over his philatelic collection and letting the house fall apart piece by piece.

Flavia is usually left to her own devices. By choice – for self-preservation – she inhabits a leaky, chilly bedroom in a distant wing of the house. She spends much of her time in the well-equipped chemistry lab left there by her late great-uncle, Tarquin de Luce. Flavia is interested in poisons, especially, and other forms of murder intrigue her as well. When she’s not at home, Flavia is often snooping around Bishop’s Lacey and its environs, observing people. Some might call it snooping. Harriet’s old bicycle is her vehicle of choice. One comfort in Flavia’s life is her belief that she has a special kinship with the mother she cannot remember. Her sisters, she figures, must be envious.

Occasionally, someone in the village complains to her father about Flavia’s unruly ways, and he orders her to join the church choir or, worse, stay home. Flavia is as clever at finding ways to circumvent his orders as she is at just about everything else.

As the book opens, Flavia is so upset by a message from a Gypsy fortuneteller at the churchyard fair that she accidentally knocks over a candle and burns down the woman’s tent. To make up for what she’s done, Flavia then invites the Gypsy to bring her caravan to camp on Buckshaw land near the river. Flavia’s mother, it seems, used to welcome the Gypsies there, but after her death, Flavia’s father had inexplicably banished them.

When Flavia sneaks out of Buckshaw before dawn the next morning – having been awakened by one of a number of suspicious happenings that may or may not be the red herrings of the book’s title – she finds the old Gypsy beaten, bloody and near death at her caravan.

Flavia, of course, is instantly on the case despite warnings from her father and the local constabulary, who know her only too well. But which case? So many odd and even dangerous things happen. Which of these have anything to do with the Gypsy, and if others aren’t related to the Gypsy, what are they all about?

These stories are skillfully evocative of a particular time and place. They are fine mysteries, not too easily solved. But without a doubt, it is Flavia who makes these books so wonderfully enjoyable. She is wise beyond her hears, knowledgeable as only an intelligent little girl who’s had many hours alone in a chemistry lab and a well-stocked library can be.

But despite all that, Flavia is also convincingly an 11-year-old motherless girl.  You don’t learn everything about life in books or a lab. She’s touchingly naïve and vulnerable in many respects, and even she will admit she makes a mistake now and then. Anyone who can remember being 11 will cheer every time Flavia outwits her elders, every time she gets away with being a little bit sneaky – and very, very brave.

This entry was posted in Mysteries. Bookmark the permalink.