Whom we love, what we see 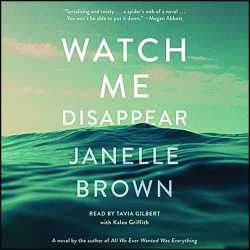 Billie Flanagan was a force of nature, almost larger than life. Everybody loved and admired her. Right?

When Janelle Brown’s gripping third novel opens, Billie has been missing, presumed dead, for almost a year. Her husband, Jonathan, and her teenage daughter, Olive, have been struggling to adjust to life without her, and as the anniversary of her disappearance nears, things take a decided turn for the worse.

After the overwhelming response to the emotional eulogy he gave at her memorial service, Jonathan decided to quit his demanding job as a journalist writing about the tech industry to write a loving memoir about this remarkable woman with whom he was blessed to share a life and a daughter.

But until Billie is declared legally dead, he can’t collect her life insurance money, and he’s having a tough time affording their Bay Area lifestyle. He’s woefully behind on tuition for Olive’s private, all-girls high school. He’s behind on everything, even keeping groceries and necessities in the house. It doesn’t help that he’s drinking too much.

And Olive, increasingly, is feeling that what few friends she has are turning away from her. Olive always felt that she didn’t live up to Billie’s example or expectations, that she was never going to be as confident, daring and forceful as her mother. With her strong-willed mother no longer there, she is not sure who she is or what she wants to do. She feels abandoned by nearly everyone.

Billie disappeared while on a solo hiking trip in the Desolation Wilderness near Lake Tahoe. Her body has not been found, only her smashed cell phone and one hiking boot. A passionate woman, Billie had thrown herself wholeheartedly into the role of Berkeley super mom, but she was never free of the restlessness that had fueled her “lost years” before she met Jonathan.

Olive begins having visions. She sees her mother in various settings, and her mother encourages Olive to look for her. Convinced that Billie is still alive, Olive becomes obsessed with finding her, and she runs into even more problems at school.

Worried about his daughter’s mental and emotional health, Jonathan wants to convince her that Billie is dead. But the more he learns about his wife, the more he has questions of his own. Did he ever really know her? What did she really do during those “lost years”? What was she doing as she grew more distant during the months before she disappeared? Could she really still be alive, and if she is, what does that mean about their relationship. Was their whole marriage a lie? He’s finding it increasingly difficult to write the loving memoir his publisher is expecting.

Brown reels the reader into the increasingly tangled web that is Billie Flanagan’s life. Like Jonathan, we want to know the truth, and the more we learn, the less we find to admire.

Eventually, it’s not just that Billie physically disappeared in that remote wilderness. It’s that the whole image of the Billie Jonathan married, and thus the whole idea of their marriage and family, that Jonathan sees slipping away.

The reader is left to wonder how well we know other people, even those with whom we are most intimate. Does love make us believe what we want to believe, see what we want to see? And what happens when that love begins to erode?

This is a book that takes hold, driving you to keep going to learn the truth and see what happens. Brown deftly moves among different points of view and different times as she weaves a story built on familiar themes – grief, loss, teenage angst – yet, in the end, original and surprising. In the audio version, the use of two narrators helps convey the shifting viewpoints and evolving understandings of whatever the truth might be.