WALKING ON MY GRAVE. By Carolyn Hart. Books on Tape. Read by Kate Reading. 8 ½ hours; 7 CDs. Also available in hardcover from Berkley. 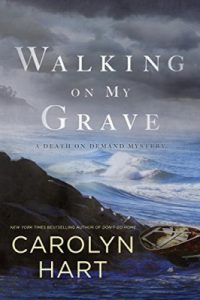 Carolyn Hart is one of the grande dames of American writers of traditional, often called cozy, mysteries. She’s written a lot of books and, deservingly, won a lot of awards and honors. This latest in her Death on Demand series is as entertaining and satisfying as her fans have every right to expect it to be.

Readers who have somehow missed the previous books in this series – which debuted nearly 30 years ago – need have no fear. It’s not difficult to figure out enough of who’s who and what’s what to get into the story. The main thing is the latest mystery, and in Hart’s experienced hands, that stands on its own – with an entertaining nod to one of Agatha Christie’s classics, And Then There Were None.

Hart’s main character is Annie Darling, who owns a bookstore named Death on Demand that specializes, of course, in mystery novels. The theme of the store means that Annie knows a lot about mysteries, and her customers care about them, so there’s plenty of opportunity for references to and discussions of other (real) mysteries and Hart’s fellow (real) writers. In other words, these novels are a treat for mystery buffs.

Annie’s home and bookstore are on Broward’s Rock, a fictional island off the South Carolina coast where most year-round residents know one another. This mystery begins when Ves Roundtree, a friend of Annie’s, suspects that someone’s trying to do her in. It seems that when Ves’ very wealthy brother died, he left his fortune to her for her lifetime, with several other beneficiaries, all with connections to the island, waiting for their inheritance.

When Ves invites the beneficiaries to a dinner at her home so that she can bring them up to date on the status of the estate, she feels that something is wrong. Not longer afterward, she barely escapes serious harm in a fall that she’s convinced was not an accident.

Before Annie, her husband, Max, and others in their circle become thoroughly convinced that Ves is really in danger, one of the heirs, who attended the dinner, dies in mysterious circumstances. Then Ves disappears. And there are more suspicious developments.

All the heirs have a motive to do away with Ves, and all have a motive to reduce the number of their fellow heirs, thus increasing the share that will go to each survivor. As things heat up, Annie and company being to wonder how many will die before they can figure out who is the villain.

Hart throws in enough twists and turns to keep you guessing, and then she wraps the mystery up in fine style.

This mystery makes a particularly enjoyable audio book, read ably by Kate Reading. There aren’t so many characters that you need a printed list to keep them straight. In typical cozy style, although there is death, the violence is mostly off-stage. The style is light but not frivolous, and, although we learn various people’s problems and motivations, this is not a probe into the dark depths of the human psyche. In short, this is a great book for a summer car trip.

This entry was posted in Audio Books, Mysteries and tagged Broward's Rock, Carolyn Hart, Death on Demand. Bookmark the permalink.