The art of death in Detroit

Bob Moyer takes a look at paperback original novel from a prolific writer of mystery stories. 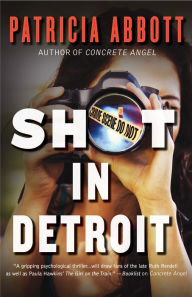 The 12 bodies in this book don’t get dead the same way. Some are gunned down, some are stabbed, and one is dismembered. After they die, however, they have one thing in common — they are shot again.

Photographer Violet Hart struggles to barely make a living, shooting bar mitzvahs and weddings. She’s a bit harried, has nothing but hookups for relationships and has just finished a highly unsuccessful gallery showing. She can feel 40 coming on fast, and she hasn’t found her métier, her raison d’etre, her oeuvre. She wanders about Detroit, looking for the elusive link to art that has evaded her.

That’s the big mystery explored here — what is art? The author heads every other chapter with quotes from famous photographers, nets of words casting about for the inspiration that leads to the real thing.

Then her hope-to-be boyfriend, a mortician, calls for her help when his photographer can’t make it for funeral photos. She finds her subject that matters: young dead black men. The subjects arrive at a rapid pace — it is Detroit, after all — and she gets caught up in the frenzy of creation.

Questioning her source, hung up over her father’s desertion, panicky about her boyfriend’s dwindling attention, she puts herself in harm’s way with a chance acquaintance, involvement with a dead body, and subsequently, the cops.

Through it all, she perseveres with a compunction bordering on the perverse to take the pictures needed for a show. A shocking final death and the completion of her work arrive simultaneously. Her personal and professional life merge into an exhibit featured in a faux review at the end of the book. The dark matter and the portrait of Detroit elevate this book, nominated for Best Paperback Original Edgar Award, above the average pulp novel.

Take a shot at it.