What the tide brings 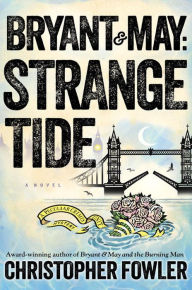 Confession: I was so despondent upon finishing Christopher Fowler’s Bryant & May and the Burning Man last year that I never wrote the review. Something terrible had happened to Arthur Bryant, that most eccentric of brilliant detectives. It all seemed so final, and so sad. I feared that book marked the end of the series, for how could it survive without the outrageous old man who, more than anyone, accounts for the success of London’s Peculiar Crimes Unit?

I should have had more faith. No matter how fervidly the powers that be try to shut it down, no matter how badly Bryant, his longtime partner John May and those who work with them might break the rules, no matter how much they are reprimanded, punished and shunted aside, the PCU always manages not only to survive but also to excel at solving those particularly difficult crimes.

And, at least for now, no matter how gravely ill he may seem, no matter how often he is ordered not to leave the office or stray from his keepers, Bryant also keeps going.

He’s back, and this time, Bryant and the rest of the crew tackle perhaps their most baffling case. It starts with the discovery of the body of a young woman who had been chained to a stone post at the edge of the Thames and left to die a horrible death. But how can it be that only one set of footprints leads to the place where she died? And why would anyone go to the trouble to chain her to that post? What does it mean?

Before the detectives can answer these and other questions, more bodies begin to litter the river. The Thames has always been a dumping ground, but these bodies seem to have some connection – or do they?

Bryant, with his vast knowledge of history, not to mention esoteric arts, would seem (as so often happens) to be the unit’s best bet for solving the case, but Bryant’s grip on reality and the present seems to be slipping away ever more alarmingly.

Will Bryant and the PCU survive? Can they solve this maddeningly complex puzzle?

Christopher Fowler has written another delightfully intelligent, zany, fascinating Bryant & May novel, chock full of interesting but arcane information, intrigue, social commentary, humanity and sly humor. May the PCU keep going for many years to come.

(And by the way, Bryant & May and the Burning Man is also well worth the read. And you’ll know, as I didn’t, that Bryant survives.)