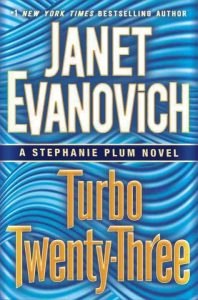 Janet Evanovich is one of those prolific writers with several series and a new novel of some sort appearing just about every time you turn around. All her books are entertaining, but the first series that propelled her into the big leagues – the one starring Stephanie Plum, an unlikely New Jersey bounty hunter – remains by far my favorite. Judging from the regularity with which these books jump to the top of The New York Times best-seller list, I am in good company.

The latest of Stephanie’s adventures is No. 23, but Evanovich manages to make this book as fresh and entertaining as the first one. And, of course, because these books have a touch of romance as well as adventure and crime, Stephanie still hasn’t resolved her attraction to the two men in her life, Morelli and Ranger, even though she and Morelli are sort of engaged to be engaged. Or something. Let Ranger say “Babe…” as only he can do, and all Stephanie’s resolutions begin to melt.

This time out, Stephanie and her intrepid sidekick, Lula, the buxom former ’ho, happen upon a refrigerated 18-wheeler as they are chasing a criminal who, once again, has jumped bail. When it turns out that the truck contains not only a load of ice cream from a local factory but also a very dead employee decorated like the factory’s famous ice cream bar, things start to get both zany and dangerous.

It seems that two local ice cream factories are warring, and eventually Stephanie winds up working undercover for Ranger’s private security company at each of them, at least briefly. Meanwhile, Lula and Randy Briggs, an annoying dwarf who’s crossed their paths before, are having late-night adventures around Trenton as they try to win a spot on a reality TV show that involves nudity. Stephanie, of course, gets roped into helping them make their videos. Further complicating her life, Stephanie is suspicious of Grandma Mazur’s new love interest.

As always, there are plenty of laughs and lots of action. Stephanie’s life and limbs are in grave danger, naturally, and things don’t go well for her current vehicle. And, also as always, despite her unusual life, Stephanie comes across not as a hardened woman of action but as a likeable gal who doesn’t like guns or violence, wants to do the right thing, loves her wacky family and friends and is just trying to figure out how someone with “virtually no marketable skills” can get by in Trenton, N.J.

These books are quick, light reads . I enjoy listening to the audio versions, with Lorelei King’s voices for the various characters adding to the hilarity.