Who did whatever it was?

Paul O’Connor’s latest reading venture involved an actual book rather than the screen of his iPhone, and he moved from 19th century fiction to a real-life 20th century mystery. 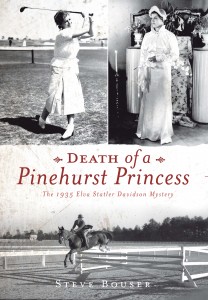 No newspaperman ever wants to bury his lead, but Steve Bouser should know that, in a mystery, the author shouldn’t tell how the story ends until, well, the end.

Too bad my old friend, the editor of the Southern Pines Pilot and a long-time North Carolina journalist, didn’t keep his mouth shut when he spoke at Raleigh’s Quail Ridge Books a few months ago.

An audience member asked him what became of the investigation into the death of Elva Statler Davidson, and he told her. And, in the process, told me and 40 other people before we’d read his book.

Fortunately, for those who pick up Bouser’s Death of a Pinehurst Princess, the author didn’t put the story’s outcome in his opening chapter. He’s written an engaging account of the events leading up to Davidson’s death and what transpired afterwards.

Davidson was found dead in her garage early on Feb. 27, 1935, and things just didn’t add up. It was a cold morning, yet she was dressed only in a sweater and a mismatched skirt that didn’t fit. Her body was still warm, but it was also obvious that she’d been dead for a time. She was not sitting in the family car, or outside it; her body was stretched across the driver’s side, her knees on the running board, her torso oddly twisted across the driver’s seat and its legroom.

So, was this a suicide? A murder? An accident?

That’s the main question in the book, as it was when Moore County officials investigated.

Davidson did not seem a likely suicide victim. At 22, she was heiress to a portion of the sizable Statler Hotel fortune, an Olympics-caliber swimmer and newly married. Nor did the scene appear to be one of an accident. Davidson was not significantly bruised, so she hadn’t hit her head, passed out and died of carbon monoxide poison. Plus, the garage was not airtight. Accident seemed the least plausible possibility.

Her husband of just a few weeks, the 42-year-old, once-divorced Henry Bradley Davidson no longer had the means to enjoy the lifestyle to which he had become accustomed. He was of one of those families, common in the day, that had acquired a certain social status from wealth that was, by 1935, long gone. Hearings into the death brought out the fact that he was almost penniless himself, but that he had the next best thing: a young wife worth hundreds of thousands of dollars who had, days before, changed her will to make him the beneficiary.

The story takes more than a year to play out, and the book is richly detailed in its accounts of two separate hearings. Bouser appropriately credits Diane McLellan, a present-day resident of the Pinehurst area, who did most of the legwork for the book and then brought it to the editor of her local paper to see if there was a news story in it. Bouser recognized a better story – the tale of a local woman who had gone to incredible ends to unearth more information about a young woman’s death than local authorities had had when they investigated in the 1930s. But McLellan didn’t want to be part of the book, so Bouser wrote a history mystery instead.

As an aside, Bouser’s telling of the story allows him to provide an interesting insight into the history of Pinehurst – much that I didn’t know – and into life in that part of the state during the Great Depression. He was surprised to find that some of the buildings involved in the murder, er, accident, er, suicide, are still standing today.

In the end, we learn that Elva Statler Davidson did, indeed, die as a result of – oh, no, I’m not going to do that. You have to read the book. Or go see Bouser when he is next in your area to blurt out the ending.

This entry was posted in American History, History, Mysteries. Bookmark the permalink.

2 Responses to Who did whatever it was?