Dealing with the devil

Bob Moyer was in Germany recently, but at least part of the time, his imagination was in New Orleans. He offers a review of the book that transported him to the Big Easy. 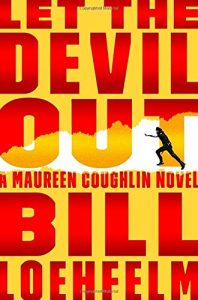 The last time we saw NOPD Officer Maureen Coughlin, she was up to her knees in the Mississippi River, up to her neck in trouble. She had tried to save a key witness against a ruthless militia group tied to elite New Orleans sources, but lost both him and a corrupt colleague to the mighty river.

Then she got put on indefinite paid administrative leave.

Too much time on her hands. Too much booze, too much running, too many nightmares, too many cigarettes, too much violence – she has to Let the Devil Out. She hangs out in bars, “…searching out one special man, the one in whom she saw herself reflected back to her, the one hiding in plain sight.”  She likes the pain; it turns into a habit.

Then she gets her badge back.

Now she can’t Let the Devil Out. She wants to change, and she hopes Preacher, her sergeant and mentor, understands. But he’s little comfort: “Three hundred years people have been coming here to be somebody else. It’s not new, what you feel.” Preacher knows something is wrong, she can feel it, she almost breaks down: “her foot began thumping on the car floor…like she had no control over it…She felt sorry for it. She thought for a split second about shooting it.” She finds it’s almost as bad being on the job as it was being off the job.

Then the FBI requests her help.

The evil FBI that no one wants to work with. But the rookie has to do what she’ s told. She has to talk to the father of a militia member, initially stopped by her and subsequently killed by someone else. Immediately after their conversation, all hell breaks loose. The militia has gone into action, and she has to keep the devil in, when she points her gun at the driver of a white van, when she’s sitting across the table from a punk she wants to beat to a pulp. The denouement of this dizzying, perversely delightful book leads her to the point where she can choose to Let the Devil Out, let him go, and “Leave him out there in the dark.” Or not.

Bill Loehfelm knows his way around New Orleans; you could use his narrative as a reference for good bars and good eats. He also knows his way around real dialogue, things that sound like what real people, in this case, real cops, say to one another. And he keeps revealing a depth of character and context that surprises us. He’s the kind of writer who understands that the devil, and a good book, are in the details.

This entry was posted in Detective fiction, Mysteries. Bookmark the permalink.