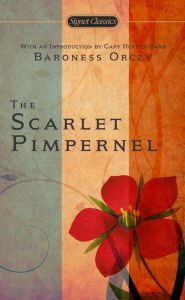 The citizens of the French Revolution are herding France’s nobles to the guillotine as the rest of the privileged world looks on in horror.

But, while Europe’s royal families are frozen in response, one Englishman, known only as “the Scarlet Pimpernel,” is saving lives.

With an army of approximately 20 assistants, the pimpernel is slipping into Paris and, through cunning and guile, is helping French noble families escape. In each instance, this anonymous hero leaves behind a calling card: a small drawing of the delicate flower, the pimpernel.

In England, he is a hero, but no one outside his cadre of assistants knows who he is. Nor will readers learn until well into the story. And it is only in the closing pages that readers will be sure they’ve figured everything out.

Baroness Orczy’s first work was performed as a play before being published as a novel in 1905. It would evolve into a popular series of books and is cited as the first-ever secret agent novel, the precursor to Ian Fleming and John LeCarre’.

While the pimpernel plans to rescue a famous nobleman from Paris, the French agent Chauvelin is working his connections in England. He has leverage with Lady Marguerite Blakeney, a French actress who has married a dimwitted English lord, is living in London and who has unlimited access to the British ruling class.

Lady Marguerite carries the shame and guilt for having inadvertently exposed a French family to the guillotine years before, and the disclosure of that mistake has ruptured her marriage. Chauvelin cares not. He wants his man and continues to press her to help him, even though a second revelation of her complicity with the revolutionaries will cost her the privileged life she now leads.

Thus we have a true bad guy, Chauvelin, a damsel in distress, Lady Marguerite, and a secret hero. And, as Chauvelin intrigues his way closer and closer to the hero, readers have no idea whether the pimpernel understands that he’s in imminent danger. But we know one thing: The pimpernel is the cleverest person in the book.

This secret-agent thriller lacks the high-tech gizmos of the Bond series, but none of the suspense. It’s a classic worth checking out of the library.

This entry was posted in Classics and tagged classic literature, secret-agent fiction, The Scarlet Pimpernel. Bookmark the permalink.