The 1970s were crazy times, but enough time has elapsed to allow a good researcher and writer to make sense of the senseless. Paul O’Connor says Jeffrey Toobin has done just that.

AMERICAN HEIRESS: THE WILD SAGA OF THE KIDNAPPING, CRIMES AND TRIALS OF PATTY HEARST. By Jeffrey Toobin. Doubleday. 339 pages. $28.95. 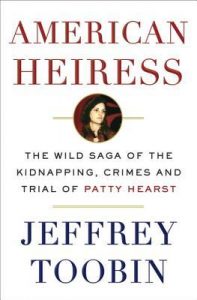 Most of us who were alive during the Patty Hearst ordeal, I suspect, stopped thinking about her a long time ago. There wasn’t much to like about the heiress to the Hearst Newspapers fortune, not much reason to wonder or care how she’s been doing since getting out of prison in1979.

Then, Jeffrey Toobin came along with American Heiress, resurrecting her in our national consciousness with a book that is so well researched, so well constructed and so cleanly written that we’ll devour his 339 pages.

Patricia, as she preferred to be known, gained national attention in 1974 at a time when the San Francisco Bay area roiled with a mixture of street crime, strained race relations and radical politics. Anarchists, socialists, nihilists, you name them, were conducting nearly daily bombings, and one obscure group, the Symbionese Liberation Army, had assassinated a popular African-American schools superintendent just months previous.

Hearst, 19, and her exceptionally bland and self-indulgent fiancé were living in a San Francisco apartment when, on the night of Feb. 20, someone knocked. After her fiancé opened the door, the two were wrestled to the floor, although the fiancé quickly escaped. Hearst was tossed into the trunk of a car and spirited into the national limelight.

It would be 19 months before she was arrested, yes arrested, and charged with bank robbery. Within two months of being kidnapped by the Symbionese Liberation Army, she had joined their ranks, possibly finding something to be excited about – a bank robbery and a violent overturning of society — for the first time in her life.

Had it not been for its violent aspects, the Hearst/SLA story could have been easily developed into a TV sitcom. Something akin to Three’s Company: Kidnapped boring rich girl joins an “army” of eight, most of whom are spoiled middle class pseudo-intellectuals led by a delusional escaped inmate. It’s an army of generals but no soldiers, of grand aspirations and pronouncements but no chance of achieving them. There were times I couldn’t help but laugh, even though I’m sure I wasn’t supposed to.

Toobin’s research is magnificent. He takes us through the SLA’s days on the West Coast, its trip cross country, its trip back west and then through Hearst’s capture and trial.

His telling of the story is even better. The legal writer for The New Yorker magazine, Toobin writes so clearly that the reading is effortless. It’s a joy to read an entire book and not find a single cliché.

A friend recently asked if I came away from the book disliking Hearst. I can’t remember ever really liking her, I should say, and this book did nothing to change my mind. Patty Hearst has always gotten her way in life. She’s stood for nothing other than herself, her character chameleon-like in transforming to the circumstances and what was in her own best interests. She should have been tried as an accomplice to murder. Instead, she served a few months in jail.

In 2015, her shih tzu won the toy category in the Westminster Kennel Club Dog Show.