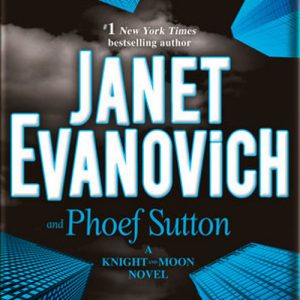 For just plain fun, I adore Janet Evanovich’s Stephanie Plum series, and I’ve also enjoyed some of Evanovich’s forays into other series, sometimes with a co-author.

As of now, I have a new favorite for Evanovich’s No. 2 series (given that Stephanie Plum will never lose her place as No. 1 in my heart): the Knight-Moon novels.

The pair, Emerson Knight and Riley Moon, have their action-packed, hilarious debut in Curious Minds, Evanovich’s collaboration with Phoef Sutton, an Emmy-winning TV writer and author who teamed with her earlier on Wicked Charms, a Lizzy and Diesel adventure.

Riley grew up as a country girl in Texas, the daughter of a sheriff. Her ambitions, however, took her far away from home, and now equipped with degrees in business and law from Harvard, she’s settling in to her new job at the powerful banking firm of Blane-Grunwald in Washington.

Her fast track to success takes a wildly unexpected detour, however, when the bank sends her to babysit Emerson Knight, an extremely eccentric young man who, upon the death of his father, has become also extremely wealthy. Blane-Grunwald wants to continue caring for his wealth.

When she makes a personal-banker call on Emerson at his mansion on the edge of Rock Creek Park, Riley discovers that he does not want to hear her carefully rehearsed platitudes. Really, he doesn’t want to deal with her at all. But since she’s there, he orders her to take him to the bank so that he can see his gold.

Yes, gold. Part of the wealth Emerson has inherited includes gold bars, and he has become suspicious that there might be a problem with his gold – not to mention everyone else’s gold. Emerson comes to believe there’s a diabolical plot in the works that could disrupt the world’s economies and give someone way too much power.

Riley is initially assigned to keep an eye on Emerson, but she soon finds herself in the thick of whatever it is he’s doing, in fear not only for her job but also for her life. Their investigations take them from Washington to New York City and eventually to Area 51 in the Nevada desert. They run afoul of some very high-level folks.

Emerson is delightfully quirky – a good-looking (of course) nerd with unexpected talents, whose utter lack of and disregard for social skills make him all the more endearing. Despite her Harvard degrees, Riley often sounds a little gee-whiz, a lot, come to think of it, like Stephanie Plum, but that’s OK. She is, after all, not far removed from her rural Texas childhood, and, besides, who doesn’t love Stephanie Plum?

This book is light entertainment of a high order. It’s funny, fast-moving, surprising and charming. There develops, of course, a spark of attraction between Riley and Emerson as they spend more time together in life-threatening situations, but much is left for the future.

Lorelei King does her usual A-plus job of reading this romp, with just the right amount of irony in her voice.