Many newspaper reporters dream of one day writing a novel. Dan Fesperman is living the dream – he just published No. 10. Paul O’Connor isn’t a big fan of mysteries, but he found this one quite entertaining. 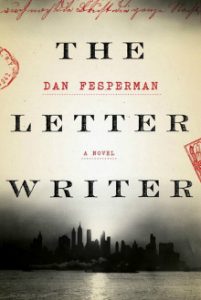 The last few months hadn’t been good for Woodrow Cain when he arrived in New York City in February 1942.

Some undisclosed event had precipitated his leaving a small North Carolina town, where he was a detective, and heading north, leaving his family behind. And as he steps off the train, he learns that a luxury cruise liner, in the harbor to be retrofitted for carrying troops, is on fire, quite possibly an act of sabotage by German agents.

Things aren’t much better two months later when, after passing the sergeant’s exam, he encounters hostile colleagues in his local precinct. They don’t like him because he’s Southern and the new man who just leapfrogged many of them on the promotion list. Word is that someone important pulled strings to get him the job.

When assigned to investigate a corpse washed ashore on the New York side of the Hudson River, he alienates a pair of patrol officers. But it is that corpse that leads him to Danziger, an Eastern European immigrant fluent in multiple languages who supports himself by translating, writing and reading letters for his immigrant neighbors and who appears to know much the detective will need to learn.

With the Cain-Danziger alliance, Dan Fesperman sets us up for a series of mysteries: Who killed the man in the river? Why is Cain in New York, and what happened back in North Carolina? Who is Danziger, and what is his past? Which New York cops and prosecutors are crooked, if any? How could one guy get himself into so much hot water so fast?

Full disclosure. I’ve known Dan Fesperman since the early 1980s when he and I were reporters in Raleigh, he for The Charlotte News. I had a beer with him in Baltimore a few weeks ago, and he told me he’d spent a year living in New York City researching this novel.

Here’s what he did with that research. He brought together a series of historical events from 1942, including historical characters from the time, and snaked a murder mystery between them. So, while Woodrow Cain is a fictional character, most of the others are either true historical figures or fictional characters built from a historical basis. And this particular case of homicide might be fictional, but murder was fairly common in the city at the time.

And what are those historical events? To answer that would spoil the suspense because, for the unaware, the historical events are as much a mystery here as is the identity of the murderer, if there is a murderer. I’m not saying. Fesperman’s afterword goes into detail on how he pieced it all together.

This is Fesperman’s 10th novel. We reviewed The Warlord’s Son a few years back here at Briar Patch Books and liked it. But this is better. These characters are fuller, more complex, the mystery is more confounding. He spent that year well, learning much about the 1942 layout of the city, the whereabouts of commercial spots, city landmarks and bad guy hangouts.

I don’t read many mysteries, or, for that matter, much popular fiction. But I suspect even crime novel aficionados will find much to enjoy in The Letter Writer.