A (very different) tale of Vietnam

Long before he was a public school teacher and principal, my husband, Lloyd Brinson, was a Marine officer who served in Vietnam. Who would have thought he’d find so much of value in a children’s novel set in contemporary times in that country? 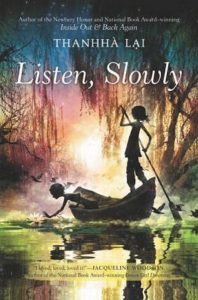 A fourth-grade boy introduced me to Thanhha Lai’s finely crafted writing. I was in an elementary school to mentor another student, who, that day, did not want any mentoring during silent reading time. I wandered a few rows until I saw this boy reading what appeared to be poetry. NO WAY… not this boy, a full blooded, pure American through and through male homo sapiens. I leaned down to ask him quietly: “What’s your book about?”

The boy used a finger to mark his place on the page and took about 10 seconds to think and whisper, almost reverently: “It’s about the struggles of people.” He immediately returned to his reading of Lai’s brilliant verse novel Inside Out & Back Again. I ordered a copy that night. I have underlined, dog-eared and written in the margins of that intense tale of the plight of Vietnamese refugees as sensed through the eyes, ears, nose, hands and feet of a 10-year-old girl born in Saigon, South Vietnam, now Ho Chi Minh City, Vietnam, as she and her family escaped and settled in the United States.

My new copy of Listen, Slowly, the tale of a California-born 12-year-old daughter of Vietnamese refugees and her summer in Vietnam is underlined, dog-eared, etc., maybe even more than Inside Out… Like the earlier book, this novel is labeled a children’s book, for ages 8-12, but older readers will also find it rewarding. First published in 2015, Listen, Slowly was a New York Times Book Review Notable Book and a Publisher’s Weekly Best Book of the Year.

Mia (at school and the beach) Mai (at home) is a thoroughly Laguna Beach girl and proud of it. She is tan, not yellow as is most of her family, and plans to get more sun than ever, now that she is old enough to ride the shuttle to nearby Anita Beach without an adult alongside. THIS should be the SUMMER OF HER LIFE, if all goes as planned. There is, as there should be, a love triangle, which she WILL manage at the beach. This is a smart, determined girl poised to make the California beach scene.

Mia/Mai does have the summer of her life, but that summer will be, very much against her will, in Vietnam with her grandmother and her father. She will endure a rite of passage few modern California tweens could imagine, much less survive, and she emerges as… well, you just have to read this tale….

Mai/Mia’s parents escaped the chaos of Vietnam as children in the 1970s, met in college and have lived the American Dream; both are successful professionals who specialize in giving back to people less fortunate. They refuse to tell her much about their childhood and early years in the USA; Mai/Mia explains: “… most of what I know about Vietnam comes from PBS, especially from the documentary The Fall of Saigon. Mom insisted I watch it so I’d understand – drumroll, please – my roots.”

This strong willed, intelligent girl loves and values her family and their traditions beyond description, an Asian cultural trait that Westerners do not understand, but she is bound and determined to be a California/American girl who just happens to have Vietnamese/American parents. She quit speaking Vietnamese early in grade school. Through the next years and through most of her summer travels, she pretends not to understand the language; purposely making herself as big a pain as possible, she requires an interpreter at every stopover to write translations of what is going on.

What is going on, the central focus of this story, reflects that singularly strong Asian tradition of family that makes our Western notion of family ties trivial. What is going on is also more about THE WAR, a war that still divides many of us half a century later. Mai/Mia gave up trying to find out about THE WAR from her family long ago. She is now piqued that she has been assigned to accompany her aging grandmother, Ba, on her quest to follow the last remaining lead to the fate of her husband, a Hanoi native who fled the Communists to fight for the southern army.

Mai/Mia’s father is also going to Vietnam, but, “Dr. Do-Gooder shriveled me with facts… (about) the kids with hand burns… the kids with holes in the roofs of their mouths…” and other stricken children who won last year’s village lottery to be treated this summer by Dr. Do-Gooder. He can’t let those kids down; his wife, a high-powered prosecutor, has a trial approaching that has something to do with battered women. She can’t let those women down….

And Mai (it’s one name, now that she’s in Ba’s homeland) can’t let her family, and especially her revered grandmother, down either.

Thanhha Lai uses a California tween’s language and perspective to portray vividly the panorama that is Vietnam – the capricious weather, the incredible terrain, the lovely villages and villagers, the plant and animal life and how that tween became a part of all this – and allows the reader to be pulled into the middle of it.

Mai marvels at the villagers’ conservation of resources while living within nature’s limits. As for their diets: “This being the land of perfectly portioned eaters, people nibble on one square per day, if that much. So many good habits in one population are really annoying.”

She has encounters (as everyone does in Vietnam) with leeches, frogs and the insects, especially MOSQUITOES (caps mine): “Hundreds of them, aiming for me with baby needles, stabbing, stabbing. They’re hairy, black, superbuzzy, and I swear the size of flies, which are also everywhere but at least they don’t sting.”

Lai once again plays with her two languages, sometimes at levels far beyond Mai’s age. Oh, I forgot to mention, her mother requires Mai to learn one SAT word a day, even while dodging Saigon traffic and recovering from falling into a putrid lake.

As their incredible journey nears an end, Mai reflects upon what she has experienced and decides to stop fretting over her best California friend and HIM, the third angle of her love triangle, which, “like so many other triangles, will eventually solve itself and life goes on.” She then checks the smart phone her mother hid in her luggage to discover a Friend request from HIM.

“I take back every mature, philosophical thought I just had about triangles,” she says, beginning to have second thoughts about facing the last challenge of the summer. Her original obligation to her Ba is done and over. She could make a strong case to hop a flight back to finish this summer with a flourish in California, but a new close friend here in Vietnam could really use her help for a couple of weeks. Only Mai can do the job….

You’re going to love this book.