Keeping the seas safe in a perilous world

Here’s another reviewing collaboration with my U.S. Navy officer son, currently assigned to the U.S. Naval Academy as an instructor in seamanship and navigation. Although the two of us approach this book from markedly different backgrounds, we both heartily enjoyed it. That statement in itself is quite a commendation. 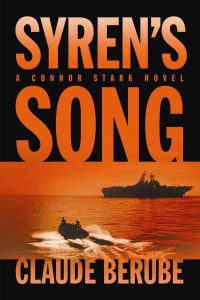 Connor Stark is back in fine form in Claude Berube’s second military thriller, and, we’re happy to report, so is Damien Golzari, his nemesis turned ally from the first book in the series, The Aden Effect.

Syren’s Song takes up not long after the first book closes. Stark, a former officer who was dishonorably discharged from the Navy for reasons that remain mostly mysterious, is back at work at his private maritime security company in Scotland, when, once again, international events call him into action.

The Tamil Tigers have re-emerged with a vengeance, launching a devastating attack on the Sri Lankan navy. The Sri Lankan government issues Stark a letter of marque (yes, more or less licensing someone to do what otherwise would be piracy, as in the storied olden days), hoping he can stop the terrorists and restore order.

The U.S. Navy gets involved, too, and Berube also brings back some of the personnel we met in the first book. As in the first book, he puts his experience in the Navy, at the Naval Academy and in Naval Intelligence to good use in his fiction.

One of the many strengths of Berube’s novels is that, even though the books are relatively short, he manages to weave in a wealth of material that goes beyond the surface. Readers increasingly see the complexities of the main characters, and many of the minor characters have considerable depth as well. No one is even close to a super hero; everyone has been knocked back by life in one way or another, and we admire Stark and Golzari all the more for the way they have pulled themselves together and continued to serve as best they can, to work for what they believe is right. Even Berube’s portrayal of the U.S. Navy is realistic, showing that there are good officers and there are also some who probably should be doing something else.

Golzari, a diplomatic security special agent, is in the area investigating the murder of a fellow agent, which at first would seem to be unrelated to Stark’s mission. Making things even more interesting, Melanie Arden, a veteran journalist who turns out to be Golzari’s ex-wife, is in the jungle trying to track down a story on the Sea Tigers’ mining operations and exploitation of local people, including children.

The development of recurring characters and the questions of right and wrong, justice and fairness, that they face, enrich the book. But don’t think for a minute that Berube skimps on tension and intrigue. This book is tautly plotted, with enough action to satisfy any fan of military thrillers.

While some of that action is on the high seas, Berube also takes us this time into the jungles for some different challenges and adventures. And there’s a lot of cutting-edge technology as well. The Sea Tigers have a devastating new weapon with horrifying potential. Berube describes maritime warfare and weapons that haven’t actually been put into use, and he does so in a way that’s both plausible and frightening. It’s interesting, too, that when Berube has the U.S. Navy lend warships to the Sri Lankans, they are the controversial new littoral combat ships – and, the fate of these LCSs in his story suggests he’s among those concerned about possible flaws.

(Those fans who aren’t familiar with all the Navy acronyms will be pleased to see that Berube provides a handy list this time.)

Syren’s Song is a fine book, one that makes Berube’s growing number of fans eager for the next Connor Stark adventure. Readers will look forward to another plot that’s intricate yet understandable, to plenty of action, and to spending more time with these increasingly intriguing characters. It is, however, time that Ensign Bobby Fisk becomes a LTJG. He’s proved himself.