One war ends, another simmers

Bob Moyer takes a look at the latest book in a series about a detective in Germany during the World War II era.

THE OTHER SIDE OF SILENCE: A Bernie Gunther Novel. By Philip Kerr. Putnam. 400 pages. $27. 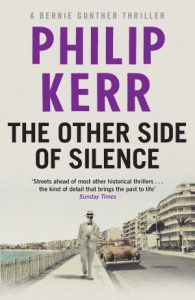 Some things change. In this accomplished series about the moral and physical dilemma of German detective Bernie Gunther during World War II, the war is finally over.

Bernie isn’t in Germany; Bernie is in France, and Bernie isn’t Bernie anymore. He’s Walter Wolf, the concierge at the Grand Hotel du Saint-Jean-Cap-Ferrat on the Riviera. His duties don’t approach the life-or-death dilemmas he faced in the German army. He jokes that his sleuthing is reduced to peeking through a keyhole to check if that blonde is really a blonde (most of them aren’t he claims) and answer stupid questions from rich guests, with a smile. He plays bridge, too, and comes to be included in the circle of W. Somerset Maugham, the legendary writer who has an estate nearby. No royalty involved, but a lot of queens, a kind of company Bernie isn’t comfortable with.

Some things, however, never change. Bernie ends up in the middle once again. Maugham blackmails Bernie into assisting him because he is being blackmailed, by someone from Bernie’s past. That man, one Harold Heinz Hennig, told Maugham about Bernie. During the war, Hennig practiced his trade for the benefit of his Gestapo superiors, and to the demise of two people close to Bernie in Konigsberg. Now, he has compromising pictures of Maugham, once an English spy, and some companions cavorting in the nude. That’s just a teaser, however. Hennig soon pulls out the big prize, a tape in which famous English spies who defected to Russia name names. Bernie is the messenger, and, as always, people try to kill the messenger.

True to form, Bernie gets hooked by a “fish.”  That’s gay slang here for a woman, who disappoints Bernie (so what’s new?), and almost gets him killed in a script put together by the Russians to fool the British. Bernie, finding himself mixed up with some bad actors, puts on a bravura performance, improvising with the few facts he has. It’s all just foreplay for the Cold War that’s heating up, and Bernie comes out of it in one piece.

At the end of the book, he stands at his desk, waiting – for the next guest, and for his next adventure, coming out next year.