The Sounds of Battle at Sea

When I drive alone, I like to listen to audio books.  I listen almost exclusively to fiction, just as almost everything I read is fiction. It’s not that I dislike nonfiction; it’s more that try as I might, I find it hard to make myself read nonfiction. I blame this failing on my long years working for newspapers, reading (often grim) news about reality all day long. Whenever I had the luxury of reading for pleasure, I wanted to be transported to some other world.

Occasionally, though, I make an exception. A couple of years ago, when my younger son was a midshipman at the U.S. Naval Academy, a parents’ e-mail list brought my attention to a memoir by Craig Mullaney, a young West Point graduate, Rhodes scholar and veteran of the war in Afghanistan who had taught briefly at the Naval Academy. As I said in a review for the Winston-Salem Journal at the time, when I started reading his memoir, The Unforgiving Minute: A Soldier’s Education, I could not put it down. It’s out in paperback now, and I recommend it to anyone who has not read it. I remembered that experience when I was offered a review copy of the audio version of James Hornfischer’s new book, Neptune’s Inferno: The U.S. Navy at Guadalcanal. 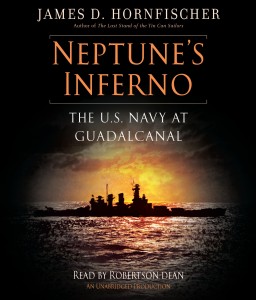 With my younger son now an ensign in the Navy, assigned to a ship, I thought that reading a naval history book might be a useful part of my education. I knew that, given my problems with nonfiction, however well written the book might be, I would be unlikely to sit down and read it. But I thought that if it were sufficiently engaging, I would listen to it.

Engaging is too mild a word. This book is gripping. I found myself taking the long way to various driving destinations, just so I could hear another chapter.

The book is also horrifying. For my generation – early baby boomers – World War II is a serious gap in our knowledge of history. Our fathers fought in the war but rarely talked about it. Our textbooks and history classes usually stopped early in the 20th century, if they went that far. What we knew about that war was gleaned from the conversations of our elders and other references in media and society.

Guadalcanal was, in my mind, a battle that occurred somewhere in the Pacific. It was one of many names of battle sites displayed on the façade inside Navy-Marine Corps Memorial Stadium, Navy football’s home field in Annapolis. Marines fought there, I vaguely thought. I figured “we” won.

James Hornfischer, well respected for his books Ship of Ghosts and The Last Stand of the Tin Can Sailors, has set me straight. He acknowledges that Guadalcanal has often been portrayed as a Marine victory, and then goes on to tell the amazing story of a long, agonizing, deadly naval campaign that ultimately was the turning point in the war in the Pacific against the Imperial Japanese Navy.

The Guadalcanal campaign was a series of seven major naval actions, starting in August of 1942 and grinding to an end in February of the next year. The U.S. Navy, still reeling from the surprise attack on Pearl Harbor in December 1941, was just beginning to learn how to fight the Japanese, but the education would have to be by trial and error. There was no time to waste. The Japanese were storming across the Pacific, island by island, threatening Australia.

Marines fought bravely on Guadalcanal, without a doubt. But it was the sacrifices of Navy ships and sailors that ultimately established control of the seaways around the Solomon Islands, control that was crucial for establishing American bases and stopping the Japanese onslaught. I use the word sacrifices literally. For every one American killed on land at Guadalcanal, three sailors died at sea. And the waters off Guadalcanal were dubbed Iron Bottom Sound because they were littered with the shattered wreckage of so many ships and planes.

Hornfischer interviewed people who were there. He unearthed unpublished eyewitness accounts, and he read documents that have only recently become available. He weaves all this information together into a powerful story. He details the battles, but he also masterfully puts them into all sorts of relevant context: history, the progress of the war, politics, the mindset of the Navy, rivalries between the various U.S. armed forces.

The book is a frank accounting, not a glorification of the Navy. It probes the many, often deadly, mistakes that were made up and down the chain of command.

Many times, it seems as though no one could possibly emerge from the Guadalcanal campaign with a claim to any sort of victory. Rather, the battles seemed like senseless slaughter in which Japanese and American ships and planes blew each other up, killing and maiming many hundreds of men in the process. And often, in the confusion of nighttime ship-to-ship combat, U.S. ships were hit by friendly fire.

Hornfischer manages to make sense out of the horror, eventually showing the reader that the deaths and destruction, even though they were undoubtedly greater than they needed to have been, were not in vain. What happened at Guadalcanal did matter, a great deal.

Even while analyzing the bigger picture, Hornfischer never loses sight of the personal. He tells the stories of many of the people who fought, those who survived as well as those who died. In his skilled narration, these people come vividly alive, whether they are the five brothers of a farm family who enlisted and persuaded the Navy to let them serve on the same ship, or the admirals whose careers – and sometimes lives – were on the line in that bloody campaign.

And bloody it was. Hornfischer portrays the reality of the fight on a destroyer, cruiser or battleship in wrenchingly vivid detail. We hear, smell and feel the bombs and torpedoes hitting and the fires raging. We see the piles of mangled bodies on a deck red with blood.

The deep voice of Robertson Dean, a Broadway actor, lends just the right air of gravity to the reading, with an occasional ironic twist. I have one reservation about listening to rather than reading this book: I found myself wanting to see maps, which are included in the print version. But it’s easy enough to hear the story and then check out a map later.

This is a fascinating, moving book, one that brings home the enormity of what happened at Guadalcanal. It teaches us, or reminds us, what World War II really was all about.

In the end, Hornfischer makes clear, the valiant sailors of the U.S Navy won a psychological and emotional victory at Guadalcanal as much as a military one. Until that campaign, the Japanese had not believed that the Americans were tough enough or determined enough to win the war. Guadalcanal proved to them that when pressed, the Americans would fight with alarming fury and indomitable courage.

I was right about at least one thing: Listening to the audio version was an excellent way to read this worthwhile book. I am still making up my mind, however, whether reading this book was a good idea for the mother of a newly minted U.S. Navy officer whose ship is set to deploy this summer.

This entry was posted in Audio Books, History, Military History and tagged military-history. Bookmark the permalink.

1 Response to The Sounds of Battle at Sea