A new look at a forgotten war

Before he was a journalist or a public school teacher or administrator, and before he was my husband, Lloyd Brinson was a young U.S. Marine officer who served in Vietnam. He finds much that’s worthwhile in a new book by a writer who was a young soldier in a different war. 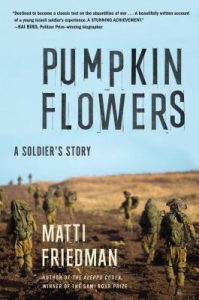 Welcome to Matti’s world… and to Avi’s… and Eran’s… and Mordecai’s and…. on and on – a seemingly endless roll call of Jewish teenagers doing their obligatory time in the Israeli Army to protect the artificial borders of that country from her neighbors in the 1990s.

Pumpkinflowers is Matti Friedman’s crisp, matter-of-fact description of how the army turns boys just out of high school into soldiers and then sends them to do dangerous things for reasons no one seemed (then or now) to understand. The author describes eloquently the purpose of this tale: It is to put on record one account of a war that nobody realized was happening. These teenagers suddenly: “… found themselves in a war – in a forgotten little corner of a forgotten little war but one that has nonetheless reverberated in our lives … and in the world since it ended one night in the first spring of the new century. Anyone looking for the origins of the Middle East today would do well to look closely at these events.”

After basic training – aka boot camp – Avi and Matti and the other boys-turned-soldiers in this story were sent to man The Pumpkin, the name of an outpost on a hill in Lebanon, ostensibly placed to deter terrorism. As the story progresses, the reader begins to see how the Hezbollah used the Pumpkin and the other botanically named outposts to train personnel, experiment with tactics and exploit the Israelis, turning that “Party of God” into the powerful threat it is today.

Few of us – even those of us with combat experience – enjoy spending much time reflecting on the absurdities, atrocities and contradictions of warfare. Even fewer people who enjoy books want to be handed a platter of hors d’oeuvres detailing the human suffering of the participants of war and the agonies of the innocent – and some not so innocent – bystanders.

But this tale of the life and death of the Pumpkin – and the lives and deaths of its inhabitants — is such compelling reading that I wish it could be required reading for anyone running for public office in any civilized country.

The Pumpkin was not decorated with flowers, or much of anything except the bare necessities for defense, for observing the enemy and sending out patrols. One of these new soldiers’ first view of the Pumpkin was “a jumble of dun netting and concrete.”

“Flowers” meant trouble. When the young soldiers – many of them teenage girls doing their time – at the operations center in Jerusalem heard the radio operator from the Pumpkin say “flowers,” they sent helicopters, to pick up the wounded (flowers) and fly in replacements. “Oleanders” were worse news. Those were the dead.

There are officially three parts to this gripping account of that drab little Lebanese hill: The first describes Avi’s experiences in the early and mid-1990s; the second details how Jewish civilians – led by the mothers of the “flowers” and “oleanders” – reacted to the Pumpkin’s worst disaster; and the third is the time Matti and his friends occupied the outpost. The last 34 pages of narrative (preceding the footnotes) are sort of an epilogue, but are as riveting and insightful as the preceding pages. Matti tells us how he tried to draw a conclusion – to reach an end to the war he fought: “It wasn’t a conclusion. On the hill we had been at the start of something: of a new era in which conflict surges, shifts, or fades but doesn’t end, in which the most you can hope for is not peace, or the arrival of a better age, but only to remain safe as long as possible.”