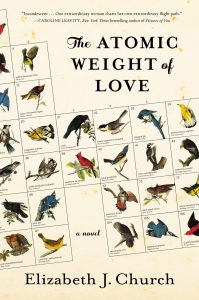 Meridian Wallace’s father, a high-school teacher, died when she was 11, but not before he had instilled in her a love for learning and a determination to succeed. Her widowed mother worked hard to make sure that Meri would have the opportunity for a good education, even though that was hardly the goal of every girl growing up in 1940s America.

When she starts at the University of Chicago at age 17, Meri is book smart but socially naïve. She doesn’t quite know how to deal with the fraternity boys and their clever chatter. Other girls at her boarding house offer her tips on clothes and guys. Meanwhile, she immerses herself in her studies and excelled in her classes.

So it’s no wonder that she’s vulnerable to the attentions of Alden Whetstone, a brilliant physics professor who is 20 years her senior and divorced. The first thing Alden does to win her heart is to excite her mind, by helping her to understand how birds fly. Birds are Meri’s passion; her dreams are of pursuing a Ph.D. and being an ornithologist.

But all this is taking place against the backdrop of World War II. Pearl Harbor is bombed not long after Meri starts at Chicago, and not long after she and Alden begin a relationship, he leaves for Los Alamos, New Mexico, where he’s working on a very important, top-secret project.

The story of Meridian Wallace becomes, in a way, the story of a brilliant young woman who sacrifices her ambitions to become a scientist when she marries an established scientist whose work is deemed much more urgent and important. In a way Meri’s story is a cliché, but only in the sense that variations of it have been told many times – because it’s so true.

This is a coming-of-age story that grows into a life story. When we first meet Meri, she’s 87, long widowed. Through her eyes, we follow what often seems one woman’s largely unremarkable life, against the backdrop of the development of the first atomic bomb, and then the changes in American society when life moved on, often tumultuously, after that war’s end.

Meri’s story is that of so many women who came of age in the 1940s and for several decades after that. Young women struggled to balance their ambitions with society’s indoctrination that marriage was the ultimate goal – if, indeed, those young women even had their horizons opened sufficiently to have ambitions besides those of marriage and family. It’s the story of how women had to struggle against not only prejudices but also laws that made it difficult for them to be truly independent. It’s the story of a struggle that still goes on in the life of many women today, despite changes wrought by the women’s movement and other societal changes.

And yet, this book is also much more. The background of life at Los Alamos is fascinating, even though we, like Meri, see only glimpses of what was really happening. And, although Meri’s dreams of graduate studies at Cornell are deferred again and again until they die, she pursues her observations and studies of crows on her own, out in the canyons and cliffs of New Mexico. Elizabeth Church’s descriptions of these intelligent birds and the landscape they inhabit are fascinating.

Eventually, after years of frustration and pent-up resentment, years of fitfully trying to fit in with the other Los Alamos wives, Meri has a love affair, with a younger man who’s been marked by another war, the one in Vietnam.

Then her struggle changes to that of balancing her desires, her hopes, with the bargain and the commitments she made when she was very young. Women are supposedly liberated now, but what does that mean?

Church writes in an understated way. Much of the book proceeds quietly, much like Meri’s days when her solitary crow-watching is her main diversion from the life of a homemaker. Yet, like Meri, the book has depths and richness, and sometimes, a surprise.

The story does not offer a too-easy, fairy-tale sort of happy ending, but it does move to a believable, ultimately satisfying conclusion. Meri may not have had the career she envisioned, but she does discover a need that she’s remarkably suited to fill, and the way to make things happen.

Elizabeth Church’s debut novel is wise but never preachy, one woman’s story that is likely to speak to many other women.