World War II continues to be an endlessly fascinating subject for those who love history. Paul O’Connor takes a look at a new book about the last major Nazi offensive. 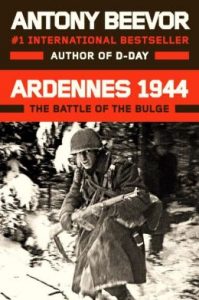 With the exception of only the Normandy landings and the battle to break out of the beachhead there, no American battle in the European theater of World War II remains as much in our contemporary discussion as The Battle of the Bulge.

How were the allies so unprepared for the massive German counterattack through the Ardennes Forest on Dec. 16, 1944? How did allied intelligence miss the presence of such a large German force? How could U.S. 1st Army Gen. Courtney Hodges have been so clueless both before, and for many hours after, the attacks began, and why were allied forces to miserably thin at exactly the spot where German forces had invaded the Low Countries in 1914 and 1940?

And, finally, how did Gen. Dwight D. Eisenhower restrain himself in dealing with British Field Marshal Bernard Law Montgomery?

Into all of those questions wades noted WW II historian Anthony Beevor with a book that makes the description “spectacularly detailed” seem wanting.

Beevor can’t answer the intelligence questions. No one has been able to do so since the battle. Extraordinary German efforts to keep their secret worked only to a degree, but the allies missed key clues. He does, however, lay out in precise detail the predicament the allies faced at the end of 1944.

The allies controlled a Northern European front from the Swiss border to the North Sea. Although American replacements were flowing across the Atlantic and the French were back in the battle, there still weren’t enough men, especially in battle-tested divisions, to give each mile of the front the manpower it deserved. In addition, Hodges was churning up U.S. lives at an horrendous pace in the Battle of the Huertgen Forest, and Gen. George Patton was doing the same along the U.S. 3rd Army’s Front.

The intra-allies war for supplies, which had to be trucked hundreds of miles, also meant that no commander had the resources he said he needed.

Beevor writes mostly from the macro viewpoint. His is mostly a history of generals and large units. But “mostly” is the key word there. If this history is to stand out from others it will do so on the strength of the author’s details for smaller operations.

The Battle of the Bulge was won because small groups of American forces held key pockets of real estate during the initial German onslaught. Here and there, they blocked crossroads, bridges or fords fit for armor just long enough for the Americans to reorganize in the rear. It seems that every skirmish, in every hamlet, gets a rich accounting. We don’t learn many of the stories of the individual soldiers who fought these battles, not in the way we would in a Stephen Ambrose history, but we do learn how many Panzers they destroyed, how they did it and what it cost the Germans in their desperate race against time.

This presents a problem in the audio format. Unless one memorizes the geography of the Ardennes region, visualizing the relative placement of each such town and villa, the listening is confusing. If you listen, as I do, on long drives, it is near impossible to see the broader battle as it would be seen in a hardcover with maps.

Beevor makes two points that I had not read before. The first is that the battle, which turned out to be the bloodiest of the war in terms of U.S. casualties, significantly weakened not only Hitler’s ability to defend his western front, but also his eastern defense. Stalin launched his winter offensive just as the allies were relieving Bastogne and reasserting their offensive. German forces that had been moved from east to west, and then been chewed up by the Americans, were not available to slow the Soviet drive to Berlin.

His second point is more a suggestion. It is possible, Beevor posits, that Montgomery suffered from Asperger’s disease. We didn’t know much about it in 1944 but we do now, and Montgomery demonstrated many of the symptoms.

Regardless of his condition, by the end of 1944 Montgomery was a danger to the allies. He’d nearly failed at Normandy, did fail in Operation Market Garden, and he was a dangerous distraction to Eisenhower at the Bulge. It was delightful hearing Sean Barrett’s British voice say as much.