Lifestyles of the rich and criminal 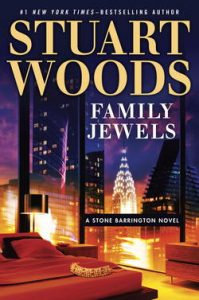 Stuart Woods cranks his Stone Barrington thrillers out pretty quickly. This one is, if I count correctly, No 37. Family Jewels, with some interesting plot twists and a fascinating historical object at its center, should please Woods’ fans.

For detective/thriller fans who somehow are not familiar with this best-selling empire: These books are pure escapism, in the midst of settings most of us can only dream about. Barrington, a former New York police detective, is now a lawyer who’s incredibly wealthy and incredibly well connected – emphasis on incredibly. He’s friends with many people in high places, including the president of the United States. In his private plane, he jets around the world, able to stay at his choice of his own posh houses and estates or those of his friends. Beautiful, accomplished women fall into bed with him at a moment’s notice, all in a civilized and sophisticated way, of course, with rarely a hint of complication. And although he’s now a lawyer rather than a cop, his travels and associations regularly take him into the midst of crime, intrigue and danger.

If you enjoy reading not just a mystery/thriller but also one that describes the rich and famous living lives that even they rarely experience, you will enjoy these books. If you want something a little closer to reality, or with more depth and character development, you need to look elsewhere.

For what they are, these books are entertaining. This one, as is often the case, works especially well as an audio book, an amusing distraction when, for example, traveling. The plot moves quickly, from the time a very wealthy woman, Carrie Fiske, shows up at his law office wanting protection from her ex-husband. Oh, and a new will might well in in order, too.

Naturally, Stone must spend a weekend with Carrie at one of her mansions, all in the name of getting the job done, and there he stumbles upon a murder. That’s only the first murder in what becomes a complicated plot that’s not nearly as predictable as it first appears. As the action mounts, Stone uncovers interesting secrets as well as valuable treasures.

1 Response to Lifestyles of the rich and criminal