A sense of duty, a desire to win

Amid the sound and fury of the presidential campaign, Paul O’Connor finds that the new biography of George H.W. Bush presents a thought-provoking contrast. 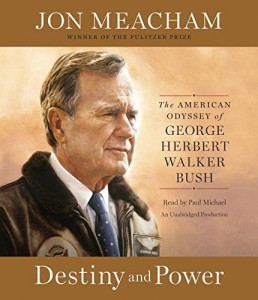 Bush 41 said Vice President Cheney and Secretary of Defense Rumsfeld set a belligerent tone for the administration of George W. Bush, the 43rd president and Bush 41’s eldest son. In that regard, they did not serve his son well.

That was the obvious news story to follow the publication of such an important biography of this former president. But given the overall theme of the book, the recurring depiction of the elder Bush that Meacham provides, another episode in the Bush family history might have been more relevant for columnists following the current campaign.

Prescott Bush, Bush 41’s father, was a Republican candidate for the U.S. Senate from Connecticut several times in the early 1950s, and he finally won in 1952. But during a key stretch in his bid, he spoke at a GOP event where Wisconsin Sen. Joe McCarthy was an honored guest.

Prescott Bush criticized McCarthy’s bullying that night, speaking politely in the Bush family way but sternly about the vicious tactics the red-baiter employed. He would later lead Senate efforts to censure McCarthy. It was an act of political courage and political honor.

George H.W. Bush has sought to live by his father’s standards, shouldering a sense of duty to his country and to an ethical framework that said much is expected from those to whom much has been granted.

This biography is set in that struggle. It is the story of a successful politician, a man probably as well prepared to take the presidency as any in our history, and of his battles to survive and advance in a political world rapidly moving toward strident camps of conservative and liberal. He was a politician who believed there was much to be accomplished by bipartisanship, moderation and compromise during a time when such accommodation ran contrary to the bipolar stridency.

Similarly distasteful to Bush is the ugliness, especially in the personal realm, of current politics, for example, the press focus on Gov. Bill Clinton’s personal life in 1992. Bush was known as a gentleman first, a man with empathy. He wanted his campaign conducted on a high plane and his administration to operate with integrity.

Yet Bush was also an extremely competitive man; children of highly successful families often are. In that regard, he reminds one of the Kennedys. And his competitive drive challenged his sense of propriety.

Bush failed to live by his own standards on a number of occasions. He backed away from his no-taxes pledge. He carped on Willie Horton during his winning 1988 presidential campaign. He was also aware, to some degree, of the Iranian arms sales. The tension between the Bush ideal and the practical politician is a major theme in the bio.

Today, as a third Bush runs for the presidency, this time Jeb Bush, one can see how the values of Prescott and George H.W. Bush are so sorely missing from the current campaign. Yes, Jeb criticizes Donald Trump, but he’s also said he would support him if he becomes the Republican nominee. One gets the sense Prescott Bush would not have.

Meacham has delivered well in this biography, making extensive use of Bush 41’s private diaries. The book flows well, and Paul Michael was an excellent choice for the audio version. At 25 hours, this is a long slog, but it is a fascinating look at a man from the World War II generation who bridged several eras in American political history.