Maggie Hope, back in the U.S.A. 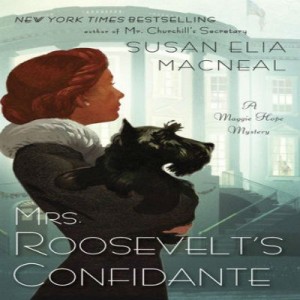 This is the fifth novel in Susan Elia MacNeal’s Maggie Hope mystery series, and, like the others, it combines the intrigue of a mystery, a bit of romance and a good measure of mostly credible World War II history. And this time out, Maggie returns to the United States while this country is reeling from the attack on Pearl Harbor.

If you enjoy fiction that incorporates real people and real events, as well as a spunky female heroine, you’ll probably like these books.

Maggie, fans will recall, is a bright young woman, a recent college graduate, who is British by birth but was raised in the United States by a spinster aunt after her parents were killed in an automobile accident. At least, that’s what she had always been led to believe. When the series begins, she has gone to England after inheriting a house there from her grandmother, only to find herself in a nation at war, with almost nightly German air raids. She decides to stay and help out, taking a job as a secretary. She finds herself working in a lowly position for Prime Minister Winston Churchill.

Over the course of the previous four books, Maggie’s talents are noticed, and she becomes a spy rather than “just” a secretary. She handles vital assignments, including protecting the young princesses Elizabeth and Margaret, and even heading to Berlin, into the heart of Nazi territory. She also makes and loses friends, falls in love and discovers that what she had always believed about her family is far from the truth. Both parents, it turns out, are still alive, and her mother is a Nazi.

Never fear, though, you need not have read the previous books to enjoy this latest one. MacNeal covers enough background to help a reader who’s new to the series or one who may have forgotten some of the details of the earlier stories.

In the new book, Maggie, the man with whom she may or may not be in love and another friend and colleague accompany Churchill to Washington, where he will confer with President Franklin Roosevelt now that the United States has joined the war.

Almost immediately, she stumbles onto a mystery involving the death of a young woman who worked for Eleanor Roosevelt and an apparent plot to discredit the First Lady. Churchill assigns her to help out Mrs. Roosevelt. Working with Mrs. Roosevelt gets Maggie involved in one of the First Lady’s causes, this one the plight of a young black man who is about to be executed in Virginia despite the belief of many supporters that he did not get a fair trial.

There’s a lot going on in this book: the mystery surrounding the young woman’s death; the plot against Mrs. Roosevelt; the meetings between FDR and Churchill, and associated negotiations and war strategies; Maggie’s love life; the looming execution and what it reveals about racism in America. MacNeal works hard to include plenty of details about life in the United States in December 1941. At times, she borders on weighing down the story with too much historical detail, and some of it raises questions: Just a couple of weeks after Pearl Harbor, in December as winter is just about to start, would there really have been signs in D.C. promoting Victory Gardens?

But, for the most part, the wartime setting is interesting, as are the portrayals of the Roosevelts, Churchill and even Walt Disney, who is rushing to produce movies to boost the war effort. And, despite the grim setting, MacNeal always works in a bit of fun and humor, in a life-goes-on sort of way.

MacNeal manages the plots and subplots well, although a few developments, most notably what transpired (and didn’t) at the execution strain credulity. The mystery is resolved satisfactorily, with the stage set for another exciting book as Maggie heads back across the pond.

This is the first time I’ve listened to an audio book version of a Maggie Hope novel, and for the most part, the lively story lends itself well to a dramatic recording. I did think in the opening chapters that Eleanor Roosevelt spoke with too British an accent, but either Susan Duerden adjusted or I grew used to it. Also, MacNeal often includes Maggie’s unspoken thoughts, but those hearing the audio version don’t have the benefit of the italic type that clues readers in to this device – something that listeners should keep in mind.

All in all, No. 5 is a welcome addition to the Maggie Hope series, and I look forward to the next one.

1 Response to Maggie Hope, back in the U.S.A.