Much has been written about the morality, efficacy and safety of drones. But what about the pilots of those unmanned killer planes? Paul O’Connor reviews a first-hand account about what it’s like to be the person who flies deadly drones for the Air Force. 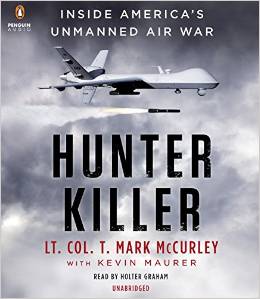 Air Force officer Mark McCurley was on a typical remotely piloted aircraft, or RPA, mission. For weeks, through his Predator drone’s cameras, he had shadowed a Taliban agent in Afghanistan, watching the man, his wife, his children, his home, his daily routine. One day, when his commanders gave him the order, he fired rockets into a field where the agent and his bodyguard were standing, killing them both.

McCurley then finished his shift at Nellis Air Force Base and commuted to his apartment in Las Vegas, getting caught in a traffic jam along the way.

In what his publisher says is the first inside account of the USAF’s remotely piloted, unmanned air campaign in Afghanistan, Iraq, Yemen and other dangerous places, McCurley tells the story of the schizophrenic life of drone pilots: A 12-hour shift on base, immersed in a mission above a combat zone, often flying in direct support of American ground forces, followed by a commute home, cable TV and a general public, including neighbors, who have no idea, nor understanding, of what he’d been doing.

McCurley was an early RPA volunteer. A graduate of the U.S. Air Force Academy, he aspired to a career as a combat pilot but was a victim of circumstances. His career prospects were dim when an opportunity arose that few others wanted. Most RPA pilots at the time were washouts from other piloting programs, he writes, and they weren’t enthusiastic about their new assignments.

In Hunter Killer, McCurley, now retired as a lieutenant colonel, takes us through his career, from his training, to numerous surveillance and combat missions flown from the relative comforts of an American base, through bureaucratic wars and finally to a monumental mission from a base in the Horn of Africa.

It’s a compelling story, if at times a tedious one. Those of us who aren’t pilots will have trouble following his often-prolonged stories of flight challenges. And there are times that the dialogue simply grates. Maybe military people really speak like that, but it doesn’t make it any easier to read.

There is plenty to learn, however, of the evolution of the warrior drone, from its relatively minor role to its widespread use today.

Then there is the story of the traffic jam, and of the unusual combat stress that RPA pilots undergo. Daily movement from war zone back to shopping malls and backyard barbecues has created psychological stresses that only this year forced the military to reduce drone missions. There aren’t enough pilots; too many are simply worn out.

McCurley successfully maneuvers between the various worlds, and writes a memoir worth reading. Graham’s narration is competent, but his voice doesn’t sound appropriate for a veteran military man from Mississippi. It’s too young, too sweet, too naïve, almost.