Elizabeth George back in top form with her new novel

A BANQUET OF CONSEQUENCES. By Elizabeth George. Read by John Lee. 18 CDs; 21 ½ hours. $50. Also available in print from Viking. 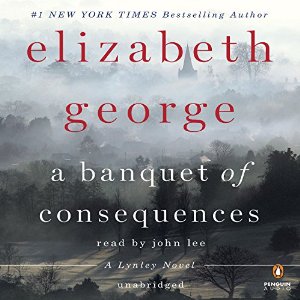 Fans of Elizabeth George’s long-running British detective series starring Inspector Thomas Lynley and company can rejoice. A Banquet of Consequences is the best novel in this series in quite a while.

The series turned dark when Lynley’s pregnant wife, Helen, was murdered on their doorstep and got even darker in What Came Before He Shot Her, a grim novel about the family that produced the boy who killed Helen. Then came novels in which Lynley and his sidekick, Detective Sergeant Barbara Havers, seemed to spend more time making bad choices than solving crimes. Havers, in particular, went so far off the rails as to cause the reader to all but lose sympathy for her.

But in this novel, George, Lynley and Havers are all back to doing what they do best: solving a complicated crime the details of which reveal a great deal about human nature in general and several fascinating characters in particular.

The story moves through time, taking us first back more than three years, to the time when a young man committed suicide in Dorset. Then we jump to two months before the present, and then a few weeks, and finally to the crime and investigation.

After her recent transgressions, Havers is being kept on such a short leash by the department’s superintendent, Isabelle Ardery, that she’s more or less useless as a detective. Barbara’s strengths include her instincts, her dogged stubbornness and her willingness to take chances when she believes she’s right. Now she’s just trying to keep Ardery from carrying her transfer her out of London to a distant village. She’s more or less behaving, but getting little done. Lynley and others are worried enough to try to intervene. Dorothea Harriman, the department secretary, thinks Barbara needs a man, and she takes on remaking Barbara as a project, often with hilarious results.

What Barbara really needs is a good case to get her back into form, and one of Dorothea’s outings inadvertently leads to Barbara meeting Clare Abbott, a noted feminist author, and her editor and longtime friend, Rory Statham. When Clare dies not long afterward, Rory is suspicious of the ruling of natural causes, and turns to Barbara fore help.

Lynley, working behind Ardery’s back, pulls strings to get the team involved in the investigation, and sends Barbara, along with Detective Sergeant Winston Nkata, to Dorset, where Clare had a second home. Lynley takes care of things in London, where he’s also, tentatively, working toward more of a committed relationship with Daidre, the veterinarian he met not long after Helen’s murder.

Clare Abbott’s assistant, Caroline Goldacre, is a thoroughly obnoxious woman who seemed to have an odd relationship with her employer. She also, we learn, is the mother of the young man who killed himself in Dorset three years earlier, as well as of another son, a London psychologist whose marriage has faltered because of his inability to deal with his brother’s suicide. Caroline’s second husband, not the biological father of the sons, is having an affair with a woman who works with him. Rory Statham is haunted by her own sad history. And the dead son had a girlfriend who now loathes Caroline.

A story this long and complex, moving across several years and involving so many complex characters with stories of their own, might seem a poor choice for an audio book. But it’s another mark of George’s skill that never once, over several days of listening whenever I was driving somewhere, did I grow confused or wish that I had a print copy of the book so I could refresh my memory about some character or plot twist.

George weaves it all together skillfully, developing the characters so completely that the reader feels as though they have stepped out of the book and into real life. And by book’s end, she brings it all together in a way that’s utterly believable. Once again, as she does in her best books, George raises questions about the essential nature of truth and justice.

She also, happily for her fans, lays the groundwork for at least some elements of the next novel. Now that she’s back in top form, we’ll find it hard to wait for that new book.