Chances are, you’ve heard more than once the criticism that the Pope was silent while Hitler was perpetrating the Holocaust. Paul O’Connor reviews a fascinating book that tells the story of what was going on behind the scenes. 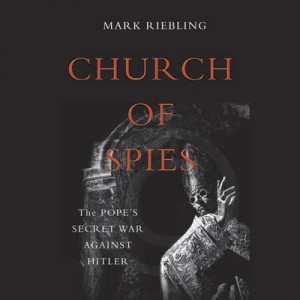 During World War II, the Vatican was curiously silent about Nazi atrocities, especially toward the Jews. For 75 years, the question has persisted: What wasn’t Pope Pius XII speaking out?

Mark Riebling, in Church of Spies, has an answer. Pius XII was otherwise occupied trying to kill Adolf Hitler.

Pius’ silence on Nazi persecution of the Jews after the second month of the war led to generations of accusations that he was “Hitler’s Pope.” While historians have since refuted that accusation, Riebling says he’s the first to uncover a concerted Vatican effort, operated with the full approval of Pius, to murder Hitler.

The fuhrer’s hatred of the Catholic Church was second only to his hatred of Jews. He planned to destroy the church in Germany and the lands he conquered. In Poland, Riebling says, Hitler’s machine killed 2.4 million Catholics, intentionally executing priests and church officials at the start of the war.

Inside Germany, there was a small, but powerful, cadre of Germans who wanted to end the war and find peace with Europe. Killing Hitler was a prerequisite for any such peace.

Adm. Wilhelm Franz Canarsis, head of German intelligence, and a number of Wehrmacht generals and officers, many German Catholics, were instrumental in the numerous failed attempts to kill Hitler, including the most famous, Operation Valkyrie, conducted by Col. Claus von Stauffenberg. (Think Tom Cruise in the 2008 movie, Valkyrie.)

The pope came into play for a number of reasons. First, the generals tended to be religious men. (Honest. I’m not making that up.) The Lutheran plotters could not morally justify any assassination of a commander. (Nor that.) They handed that responsibility to Catholics because Pius determined that Catholic doctrine allowed for an assassination in such an extreme case.

Also, the British and Americans were rightfully suspicious of anyone claiming to speak for a new German government. The plotters, therefore, needed an intermediary, a channel of communication with the Allies. Pius was the obvious choice for that role because Roosevelt and Churchill trusted him.

Pius’ silence, therefore, was necessary for two reasons. The first was to avoid further enraging Hitler, who was likely to retaliate against Catholics in his military and otherwise under his dominion, and second, to keep Hitler from coming after Pius, who, was holed up in the Vatican surrounded first by Mussollini’s regime and then, after the Italian surrender, by German divisions.

While a number of characters worked the channels between Germany and the Vatican, chief among them was lawyer Josef Muller, a devout Catholic who traveled back and forth between Munich and Rome as a triple agent. As a prominent German Catholic well known in the Vatican, he had access to Pius and others. Canarsis, head of the intelligence services and a fellow plotter, therefore sent him to Rome supposedly as a secret German agent ordered to infiltrate the Italian peace movement and report to the Nazis. But he was really there to communicate with the church regarding efforts to kill Hitler.

As one reviewer has already said of this book, it was obvious to any child who attended parochial school that the church was full of spies and snitches. You couldn’t do anything that a nun didn’t hear about within three minutes.

Church of Spies only confirms that and should, at last, put to bed the libel that Pius XII was Hitler’s Pope.

2 Responses to Not ‘Hitler’s Pope’