History with a lesson

Paul O’Connor reviews a history that can tell many Americans much they don’t know about the Eastern Front in World War II, including an important lesson about how to wage a war. 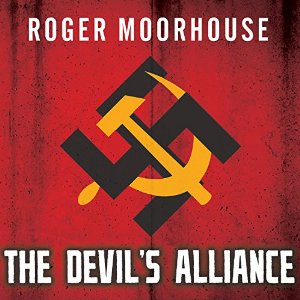 On the day U.S. forces invaded Iraq in 2003, a pair of twenty-something Republican operatives beamed at a Winston-Salem Journal colleague and me as we entered a pub. As if to say, look how smart and effective our side is, one smugly cheered, “Iraq.”

Most Americans wouldn’t. They wouldn’t know to draw the parallel between invading Iraq unnecessarily in 2003 and Hitler’s unnecessary invasion of the Soviet Union in 1941 – Operation Barbarossa. The young GOPers didn’t know that attacking a new enemy – Iraq and the Soviet Union – before defeating a first one – Afghanistan and Great Britain, respectively – was simply stupid.

Much of the eastern perspective of World War II is as lost on us today as it was on those two legislative staff assistants that day. Americans think they won the European war – with a little help from England – all by themselves, right after the Normandy landings.

But it was on the Eastern Front that the Wehrmacht bled to death, and it was there that Hitler’s folly was most obvious. He did not need to fight the Soviet Union. To the contrary, when he attacked on June 22, 1941, he broke a nearly two-year old friendship treaty he’d negotiated just before he attacked Poland in 1939.

In this book, Roger Moorhouse, a British historian, provides the story of the Nazi-Soviet alliance, one that appeared to the world to make little sense when it was announced in August 1941. Hitler had made Bolshevism the target of his vituperation for years, linking Bolshevism to the Jews. Stalin had behaved similarly toward Germany; the two nations had been vicious enemies during World War I.

But the pact had advantages.

For Hitler, it neutralized his concerns of a two-front war when he attacked Poland and it gave him access to the vast natural resources of the USSR.

For Stalin, the pact was a notice of free hand in his sphere of influence, a wealthy market for his natural resources, a source for high-end industrial goods and a chance to watch his capitalist enemies destroy each other. The pact also stabilized his western front while he was still concerned about the Japanese to his east.

But no matter how attractive all that might have been, the two sides detested each other and exhibited little mutual trust. When the Soviets moved forces into Eastern Europe and became involved in regional politics, Hitler decided the pact could survive no longer and began to plan Barbarossa.

Moorhouse is true to his title in The Devil’s Alliance. He meticulously details the atrocities, lies and deceits of both sides. There was no lesser of two evils in this pact. Satan’s twins were working with each other.

This spectacular history opens a new front for the American reader. Moorhouse is right in his opening pages. Few in the West today have any knowledge of the pact and how it played in the Barbarossa attack.

For that matter, the man in the White House in 2003 clearly didn’t understand the lesson of the Eastern Front from 1941-1945. You don’t make new enemies until you’ve dispensed with the old ones.