Not a new book, this one has held up well over time. 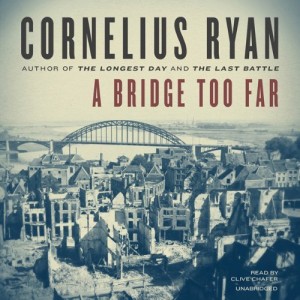 In September 1944, Gen. Dwight D. Eisenhower was looking for a path over the Rhine and into Germany; he hoped to end World War II in Europe by Christmas.

His two most prominent commanders, Field Marshal Bernard L. Montgomery and Gen. George S. Patton, each had a plan, but neither was realistic. Each wanted Eisenhower to divert the vast majority of Allied war materiel to his army for a mad dash toward Berlin.

After being rejected by Eisenhower, Montgomery improvised first. He suggested sending his 21st Army Group north from Belgium along a single road in Holland to grab a series of bridges, the last of which spanned the Rhine at Arnhem.

For the ever cautious and meticulous Montgomery, the plan was a bold deviation. With armored divisions and infantry at the Dutch border, the largest airborne operation in history would simultaneously assault three cities: from south to north, Eindhoven, Nijmegen and Arnhem. These paratroopers and glider troops would seize key bridges and hold them open as armored divisions made a 64-mile, 48-hour, mad dash.

Once over the bridges at Arnhem, the Allies could drive right into the German heartland.

At least that was the plan.

Journalist and historian Cornelius Ryan published this book in 1974, just two months before he died. (In 1977, it was the basis for a blockbuster movie.) It was the third segment of his WWII trilogy, following The Longest Day in 1959 and The Last Battle in 1966.

In A Bridge Too Far, Ryan again employed his trademark reporting, mixing stories of the strategic and tactical moves made by generals with the individual experiences of soldiers of all ranks and civilians. And, as in both the other books, he tells the story magnificently.

The plan didn’t work. Nine days after the initial assaults, British airborne troops caught in a pocket outside Arnhem slipped away from their German pursuers, crossed to the south side of the Rhine and joined the main thrust of the ground attack, only a mile away. All hopes of crossing the Rhine in force were dead.

That the Allies came as close as they did is testimony to the courage and competence of the troops involved, because Montgomery and his subordinates did about everything they could to ensure defeat.

One must wonder what Eisenhower was thinking when he approved Montgomery as the plan’s leader. The field marshal had already proved himself incapable of moving quickly and boldly when he allowed his armies to get bottled up for weeks in Caen, France, after the Normandy landings. When German generals captured top-secret Allied plans for the operation, they suspected a ruse. They considered Montgomery far too cautious to try such an aggressive attack.

British caution and arrogance doomed the attack almost from the start. British intelligence refused to believe the Dutch resistance and their own aerial reports, both of which showed growing German strength in the area. Once underway, they proceeded slowly and methodically on the ground and exercised inept caution from the air.

One anecdote illustrates how the wrong people were in charge of this effort.

After American paratroopers executed a spectacular daylight river crossing to seize a highway bridge over the Waal River, and thus open the road to relieve the nearly surrounded British airborne in Arnhem, British armor stopped.

American forces were appalled. Only 11 miles away, their own men were being strangled by the Germans, but the Brits were too cautious to race to their relief. More ground forces were needed, they said.

U.S. Gen. Maxwell Taylor later told Ryan his thoughts at the time: Had Patton been in charge, Allied armor would have charged straight ahead no matter what the odds.

Ryan is kind enough to Montgomery not to mention that four months later, when the 101st Airborne was surrounded in Bastogne, Patton did just that. He charged his Third Army through the snow to break the encirclement and begin the turning of the tide in the Battle of the Bulge.

Clyde Chafer does a fine job of reading this audiobook, but as with all Ryan histories, it is the author who was the star.