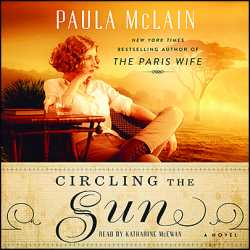 As she did so ably in The Paris Wife, the story of Ernest Hemingway’s first wife, Paula McLain once again tackles in fiction a real-life subject who has been written about by others. And once again, she creates a compelling novel that combines historical facts and characters with an imaginative journey into a character’s mind and heart.

This time, McLain gives us the story of Beryl Markham, famed aviator, horse trainer and all-around adventurer in early 20th century Kenya. Other books about Markham include West With the Night, her autobiography (although there is some dispute over whether she really wrote it herself).

A great deal is known and much more is rumored about Markham. She was the first woman pilot to fly solo across the Atlantic from east to west. She was a highly successful trainer of thoroughbred racehorses in Kenya. She pioneered the tactic of scouting for elephants by airplane. She was married three times and had one son whom she gave up to his father and grandmother. She was friends with Karen Blixen, the Danish woman who wrote Out of Africa under the pen name Isak Dinesen, and had an affair of her own with Blixen’s lover, the big game hunter and pilot Denys Finch Hatton. She had other love affairs, including, many believe, a scandalous one with the British Prince Henry, the Duke of Gloucester. She spent time with the dissolute set of British expatriates in Kenya. And on and on…

McLain weaves in much of this material, which certainly makes for an interesting story. The colonists in Kenya in the years after World War I were unconventional and nonconformist by British standards. Someone reading or listening to this book almost needs a scorecard to keep track of who was having an affair with whom, and there was a great deal of divorcing, philandering and remarrying. But the colonists and expatriates also had their own sets of rules, and they could be tough on those who, like Markham, paid them little heed.

Writing from Markham’s point of view, McLain gives us insight into why she acted as she did, even though Markham herself often did not completely understand. McLain writes about the historic trans-Atlantic flight only briefly, at the book’s beginning and end. Instead, she focuses on what led to Beryl’s tangled relationships and eventual desire to become a pilot.

Beryl’s parents (the Clutterbucks; Markham was the name of her second husband and the father of her child) moved to Kenya when she was very young, but her mother quickly returned to England, taking Beryl’s older brother and leaving the girl. Beryl grew up half wild, raised as much by the natives who lived near the farm as by her father. From the native children, especially a boy her age, she learned to hunt and to act and think like a warrior. From her father, she learned how to train horses.

Eventually, Beryl’s father attempted to rein in his wild child, but it was too late. She drove governesses away and refused to stay when sent away to school.  Her father and the “housekeeper” who had come to live with them arranged a coming-out party for her, but Beryl resisted most attempts to turn her into a proper British young lady.

So she was ill equipped to deal with the abrupt change in her life when her father’s financial woes brought an end to life as she had known it on their beloved farm. Rather than move away with her father, she married a neighboring farmer when she was only 16. When that marriage proved disastrous, she left her husband and began her quest to become a professional horse trainer, something no woman in Kenya had done.

McLain follows Markham through the next 15 or so tempestuous years, through her financial, professional and romantic ups and downs – and more than a few scandals.

Over the years, some have held Beryl Markham up as a feminist crusader, as a woman who lived her life on her own terms. McLain shows us that she was courageous, daring and sometimes foolhardy, to be sure, but also vulnerable. Markham never really accepted society’s rules and conventions, but, as she came to realize, her efforts to live as she wished sometimes led to trouble, even disaster. She was a remarkable woman, but still a woman, who had to work harder than men whenever she tried to succeed in “their” world – and who sometimes had to depend upon men for financial and other types of support. She loved the wildness, and she loved her freedom, but more than once, she paid dearly for following her dreams and impulses.

Although Markham, as depicted by McLain, is exasperating at times, she’s largely a sympathetic character, with impressive spirit and determination. Katharine McEwan’s reading in the audio version is always captivating and often touching. In Paula McLain’s masterful portrayal, Beryl Markham is not always admirable, but she is certainly intriguing.