Crime fiction, the lovely French countryside, a sense of history AND lavish meals – there’s a lot to like in the Bruno books, and Bob Moyer relishes the opportunity to review another book in the series.

‘To Protect and To Serve.” 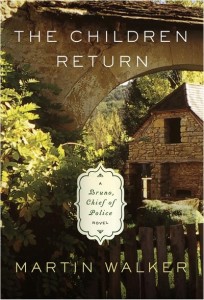 Police forces around the world have taken that phrase as their commitment. Not in the provincial French village of St. Denis, however. Bruno, Chief of Police (and the only policeman) in this Dordogne village, has a slightly different take — To Protect and Preserve is his credo. Enthralled with the culture and traditions of his adopted home, he keeps a mindful eye on the past, a watchful eye on his present charges and a judicious eye on the path forward as he guides them into the future.

Every book in this acclaimed series illustrates how the past is never past but is always present, and this latest installment is no exception. Out of the past comes a large bequest to the village from a Jewish philanthropist who claims he and his sister were sheltered as children in the village during the Holocaust. Bruno co-ordinates the arrangements for the conditions of the gift as well as security for the sister’s return.

Out of the present comes Sami, an autistic Arab boy dragooned out of a nearby mosque into making bombs in Afghanistan. His escape from his captors coincides with the gory death of an undercover agent tracking the jihadist group that enslaved the St. Denis resident. Great danger and dozens of agents from national and international agencies accompany Sami’s return to the village. Bruno has to deal with it all.

Walker usually lavishes more spice in Bruno’s cooking than he does in the chief’s love life. This time, however, he plops a hot babe into the plot, an American diplomat who can hold both a press conference and a gun with aplomb. She’s a dish that seems to please Bruno’s palate. Don’t be surprised if a bunch of little Brunos soon roam the streets of St. Denis.

The paths of the two “children” collide in a violent if slightly contrived conclusion. Once again, Bruno survives the conflagration (this is, after all, a series) and comes off as the hero. Bruno’s fans can sit back, satiated, while anticipating the next serving of Bruno’s adventures, as well as the publication this fall of The Bruno Cookbook. Bon appetit.