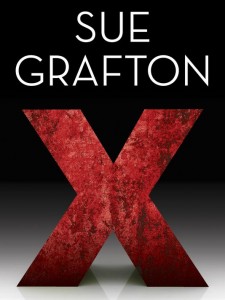 So much for speculation about what Sue Grafton would make “X” stand for in her long-running series of alphabet-named detective stories, dating back to A Is for Alibi. X stands on its own. And X does a fine job of it.

Kinsey Millhone, the tough but vulnerable, smart and endearing private eye, is between jobs when this, the 24th book in the series, opens. So when she gets a call from a woman who wants her to look into a personal matter for her, she’s willing to see what’s involved. As it turns out, the obviously wealthy woman hires Kinsey to find out where the son she gave up for adoption as an infant has gone now that he’s been released from prison. Her son, it seems, grew up to be a bank robber.

This job at first appears to be reasonably routine and easy – but then complications – including the theft of a valuable work of art – arise.

Meanwhile, Kinsey is busy with some nonpaying work. The widow of a recently murdered private investigator, a man who was a former associate if not exactly a friend, of Kinsey’s, has asked for help. The IRS wants to look into her late husband’s back taxes. When looking through a box of his papers, Kinsey finds an envelope under a false bottom. The contents of the envelope send her on a quest to find out more about the death of a young woman 28 years earlier – and about several other women who seem to have had less than pleasant dealings with that woman’s husband, Ned Lowe.

Closer to home, Kinsey is dealing with her landlord and friend Henry’s distress about the drought that’s hit their region of California – and their soaring water bills. It doesn’t help that the new next-door neighbors, an elderly couple, are increasingly annoying.

In her usual hardworking style, Kinsey juggles all these challenges. She’s determined to find out the truth about Ned Lowe, even if doing so puts her in harm’s way. She’s equally determined to right the wrongs she inadvertently contributed to when she took that little job for the wealthy woman. And if she must, she’ll deal with those pesky neighbors.

As usual, Kinsey wraps everything up and survives to investigate another day. In the process, she reflects with considerable insight on questions of law and justice, right and wrong.

Over the years, Sue Grafton has done a marvelous job of moving Kinsey along through life since she started the series in 1982. Some characters are constant; others come and go. Things change but slowly, so that Kinsey is still in the 1980s, operating in a world without cell phones, one where computers are still relatively rare and a detective who visits the local library will be looking for old city directories and telephone books, not Wi-Fi.

Happily, Judy Kaye, who has recorded the entire Alphabet Mystery series, is back for X. We must hope she’ll also read “Y” and “Z,” because after all these years and books, Kaye’s voice is unmistakably Kinsey’s.