A spy tale, stranger than fiction 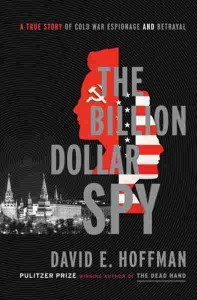 Adolf Tolkachev despised his government, and for 35 years the American military has been a beneficiary of that hatred. When American planes ruled the skies over the Balkans in the late 1990s, or Iraq in the early 1990s and after 2003, our pilots could thank Tolkachev for their technological advantages.

Beginning in 1980, Tolkachev leaked reams of documents to the Central Intelligence Agency that showed the progress of Soviet Union military technology, its capabilities, deficiencies and vulnerabilities. Those leaks allowed U.S. aircraft designers to build U.S. jets that controlled the skies in every conflict involving Soviet technology.

Tolkachev’s story is brilliantly told in Pulitzer Prize-winning author David E. Hoffman’s latest, The Billion Dollar Spy. And Dan Woren does a fine job of reading, providing an appropriate Russian inflection when necessary, his voice adding to the tension that Hoffman masterfully creates in his text.

This story borders on the not believable. For years, Tolkachev spirited top-secret documents out of his office, carried them home where he photographed them during lunch hour, and then returned them to the files where they belonged.

No one ever stopped him. No one ever questioned why he needed documents that had little or nothing to do with his own assignments. No one noticed how many documents he had signed out or that he confounded internal security measures, at times, with forged documents. No one spotted him meeting with U.S. agents in public parks.

In short, no one in the Soviet military or security apparatus had any idea that the country was losing what amounted to its most important military secrets.

If this had been presented as a work of fiction, I would have dismissed it, been unwilling to suspend belief. Everyone knows that 1980s Soviet internal security was omniscient and omnipresent.

And that’s the big surprise in this book. That system, run by the KGB, was not as good as our spy movies make it out to be. The CIA had found numerous cracks in the system, and it exploited them expertly.

Maybe the most fascinating aspect of the book is Hoffman’s reporting of the spycraft employed by American agents, the systems of dead drops, deep agents, communications and disguise that allowed the relationship with Tolkachev to go undetected.

At the same time, however, this is a story of the CIA’s incompetence, of its failures and numbskull mistakes, most notably that involving Tolkachev’s repeated attempts to provide information to the U.S. CIA and embassy officials who considered him either a crank or a KGB plant repeatedly dismissed him. Fortunately, someone finally took him seriously and looked at the material he was giving away.

That’s when the lights went on in Langley, and someone realized that Tolkachev was giving away secrets worth billions.

▪    Paul T. O’Connor, contributing editor, is a university lecturer who is available for freelance writing assignments. Contact him at ocolumn@gmail.com.