When the planes fell

I knew about Judy Blume, of course. She wrote all those children’s books. When my sons were early readers, they enjoyed the Fudge books, among others. Their childhood friends, the boys and especially the girls, read lots of Blume’s books. 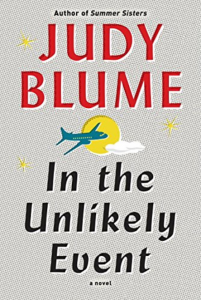 I did not know, however, that she’s also written books for adults. Now that I’m aware, I’d like to find her earlier adult fiction.

For her latest novel for adults, Judy Blume, who is 77, draws deftly from real events during her teenage years in Elizabeth, N.J. Over a span of three months in the winter of 1951-52, three commercials airplanes crashed in Elizabeth, with a devastating toll of death and destruction on the grounds as well as among the passengers and crews.

Nor surprisingly, Blume puts her skills at getting into the minds and hearts of young people to good use, centering the novel on Miri Ammerman, who is 15 and swept up in first love when the planes begin to fall from the sky. As In the Unlikely Event opens, an adult Miri is returning to Elizabeth, with trepidation for multiple reasons, for a commemoration of the terrible events that played such a big role in the worst year of her life 35 years earlier.

Blume quickly takes us back to December 1951, and we see the disasters play out through the eyes of Miri and a number of other people. The story moves quickly, drawing the fascinated reader in through brief chapters from multiple viewpoints, dialogue, and news accounts, including those written by Miri’s Uncle Henry Ammerman, an ambitious young reporter.

This is not just Miri’s story, but also the stories of her family and friends, and her friends’ families, and some of those who died in or survived the crashes. Everyone is affected in one way or another, but the effects are particularly powerful on Miri and her impressionable teenage friends. Rumors swirl – Are aliens involved? Are they being singled out? – and normal adolescent insecurities threaten to become unmanageable.

Part of the message of the book is that life goes on, however, and for Miri, her boyfriend and her best friend Valerie, the way life does proceed beings to seem as out of control as the airplanes that bring death and destruction.

Blume doe a marvelous job of depicting, without belaboring anything, American life in the early 1950s era, with its Cold War tensions and bomb scares as well as movie stars, fashions, songs and social conventions.

In the end, life does go on, even as it is filled with “unlikely events.” And, as Miri comes to realize and appreciate, not all those unlikely events are bad. Some, in fact, are pretty good.

No matter what age she’s writing for, Judy Blume tells a good story.