A harrowing story of Vietnam

Forty years after the fall of Saigon, Paul O’Connor finds that a new book about a heroic mission in the Vietnam War makes for engrossing, if disturbing, reading.

LEGEND: A HARROWING STORY FROM THE VIETNAM WAR OF ONE GREEN BERET’S HEROIC MISSION TO RESCUE A SPECIAL FORCES TEAM CAUGHT BEHIND ENEMY LINES.  By Eric Blehm. Random House Audio. Read by Fred Sanders. $40. Also in hardcover from Crown. 305 pages. $27. 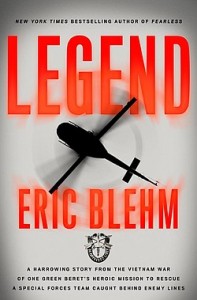 Even 40 years after helicopters flew the last Americans out of Saigon in 1975, an author writing about U.S. combat forces in Vietnam treads a thin story line between two very contentious camps, the war’s supporters and its opponents.

Eric Blehm, a best-selling adventure and military writer, tells a story of incredible bravery and transformation in Legend: A Harrowing Story from the Vietnam War of One Green Beret’s Heroic Mission to Rescue a Special Forces Team Caught Behind Enemy Lines.

Neither Blehm nor any writer on Vietnam, however, can tell such a story as Stephen Ambrose did about World War II in Band of Brothers. That’s because Americans remain sharply divided over our role in the war, our tactics and politics, and the service of our military personnel.

In the epilogue, Blehm makes his point: Americans can unite to honor the service of men like Roy Benavidez, the main character here, and still disagree on the politics. The service and politics are two different issues.

Benavidez was a troubled, tough kid growing up in rural Texas in the 1940s and early 1950s. He quit school early to help his family and stayed right on the edge of trouble with the law. But there were adults available to help, and Benavidez learned. It was in the U.S. Army that he got control of his life and his impulses.

But it was an impulsive act that got him into our history books. On May 2, 1968, while at his base in Vietnam, he heard that a team of Green Berets was surrounded and under heavy fire just over the border in Cambodia — where they weren’t supposed to be, but where they were on a special mission to document traffic on the Ho Chi Minh Trail. Without orders, he jumped on a helicopter headed to the pick-up zone and dropped himself into the fight.

The survivors of the clandestine mission were clinging to a small piece of an open area that could serve as a landing zone for a rescue helicopter, except that hundreds of North Vietnamese regulars had it covered on three sides. A chopper could land, but it was likely to be destroyed before it could take off.

To tell much more of what happened that day would be to ruin the suspense. But what transpired was horrific. The fire back and forth and from above was relentless, and the combined casualty count was nauseating. All those lives lost…

Blehm writes only from the American side. He provides no account from NVA soldiers or records. A view from that side could have greatly enhanced this story, explaining the bravery and commitment of our enemies that day. But the book is otherwise richly detailed in telling the stories of Benavidez, his Green Beret colleagues and the crews of the 240th Assault Helicopter Company.

Blehm’s book is infused with the bitterness of the Vietnam vets, for the politics that restrained them in country, the anti-war fervor back home and the 1980s budget cuts that threatened their disability and survivors’ benefits. He reports that but doesn’t stray across the line into the political right’s assertions that America lost because of peace protestors and the liberal media. So, good for him there.

It’s hard to say that one could “enjoy” this book. The material is not “enjoyable.” But it is an engrossing listen/read, one you’ll have trouble putting aside.