Here’s an intriguing review by Bob Moyer. The book is the latest in an interesting-sounding mystery series that I have somehow missed. What a treat to discover not just a new book that sounds good, but a whole series. 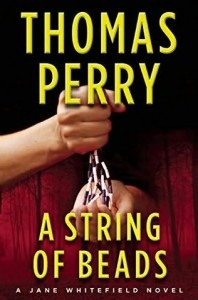 When the Seneca Clan mothers offer Jane Whitefield A String Of Beads, it isn’t a present – it is a charge, a responsibility, a contract.  She must honor it, and find a fellow Seneca and childhood friend who has been falsely accused of murder. He has run away, and the clan mothers somehow know that saving “runners” is what Jane does, taking people away from their troubles.

Once again, she slips on her backpack, slips out of her carefully constructed middle-class life, and heads down ancient trails under modern highways, back to a life she keeps trying to leave. As the path to the finding and saving of her friend Jimmy twists and turns, so does the plot. Jane soon discovers that more than the police are following them. As they traipse across the countryside, the people after them become more professional. Unfortunately for the bad guys, they don’t know Jane is protecting their prey, and they go down in prodigious numbers.

But they don’t stop. Jane must find out who they are and why they want to kill Jimmy. As the bad guys get closer, and who they are becomes clearer, Jane picks up more people to protect. The author engineers one page-turning chase after another until a masterful confrontation near the book’s conclusion.

No spoiler alert is necessary here; it’s a successful series, and Jane survives. It is testimony to the author’s skill that even though we know what will happen, we keep churning ahead to learn how. Flavoring the narrative with interesting tribal information, and lots of technical advice on how to disappear in America, he adds another chapter in the career of a powerful female protagonist, unlike any other in the mystery genre.