Readers of his review over the years know that Bob Moyer loves detective stories, mysteries and thrillers with fictional crimes perpetrated by fictional bad guys and gals. He’s also, however, intrigued by very real human stories of good versus evil, particularly those that took place during the Holocaust.

VILLAGE OF SECRETS: Defying the Nazis in Vichy France. By Caroline Moorehead. Harper Collins. 384 pages. $27.99. (Book 2 of the Resistance Trilogy) 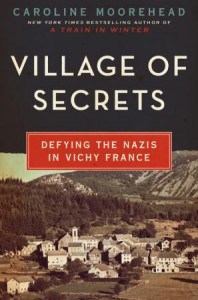 Twenty-seven. That is one conservative estimate of how many people it took to rescue one Jew from the Final Solution. After all, aiding a Jew was against the law, rewards were offered and retribution was swift. Rescue was no easier in occupied and unoccupied France; with alarming enthusiasm, the Vichy government cooperated with the collection of Jews for transport.

In resistance to this relentless collaboration stands the Plateau Vivarais-Lignon, where legend has it that thousands of Jews were sheltered, and thousands more were shepherded through on their way to Switzerland and Spain, a rescue movement inspired by the pacifism of iconic preachers. The author examines this “legend” carefully, and, while not denying impressive rescues, brave leadership and great moral strength, concludes that numbers were not that high, and the leaders not that heroic. (“They were not saints.”) However, she does demonstrate the moral fiber of the plateau residents, who defied almost as a whole what they deemed to be immoral laws. She demonstrates, to paraphrase Hillary Clinton, it takes a village to save a Jew.

Villages, that is, and Jews, plural.  Four villages including Chambon, numerous communes, and farmhouses were and are spread across the plateau, almost inaccessible in winter, and a “health retreat” for its bracing air in the summer. Cold, chilly, silent – and that’s just the people.

The majority of residents were Huguenots and Darbyists, historic refugees from persecution by the Roman Catholic Church over the years. They had retreated to this countryside and kept to themselves. Silence and a heightened sense of religious responsibility, not civil obedience, of these persecuted minorities lay the perfect ground; the plateau was primed for unquestioning participation in the sheltering of – a persecuted minority. As the author says, “Morality was of greater importance than obedience to dishonest laws.” Legend has it that pacifist ministers such as Andre and Magda Trocme and others led this effort with their preaching; the author duly notes their influence, but gives more credit to the culture of the repressed religious.

The author enumerates one nefarious scheme after another concocted by these good Christians:  lookouts in local cafes, looking the other way by village police, trapdoors, lofts, secret exits, codes, forged papers and “schools” full of children from other places. Of course, there was many a slip between safety and the end of the war. Tragic collaboration of Vichy agencies set up to ostensibly aid Jews turned records over to the officials responsible for deportation. Families were separated, brave rescuers captured.

Nevertheless, the people of the plateau carried on their task. Rescues and shelter occurred even when the Germans used the village as a site for rehabilitation of soldiers wounded at the front. The strategies developed worked so well that they were used by the resistance toward the end of the Occupation, and “…the hidden Jews and their godly protectors” moved backstage in the story. In the last nine months of the war, not a single Jew was deported.

The author estimates that closer to 800 Jews were sheltered, and as many as 8,000 passed through on their way to safety. It is ironic that no one knows the exact number rescued or the exact number of rescuers precisely because of the culture of silence that made it all possible. Many of the participants to this day do not speak of their actions. One woman, awarded the Yad Vashem medal for the Righteous by Israel for saving Jews, refused the reward, saying she “…had not acted the way she did in order to receive a medal.” Subsequently, the end of the war precipitated what the author describes as the “memory war,” as people argue with vigor and frequently vitriol about who did what. The author herself has become embroiled in this war, as many participants have denounced her in one comment after another in the reviews of her book posted on Amazon since its publication in 2014.

Passions and imperfect memories aside, the author has delivered what seems to be a measured and thoughtful record elicited from available materials and interviews. Not that often have we had the opportunity to savor not just the indomitability of the human spirit, but also a community and culture that aided it.