Danger is in the eye of the beholder

Paula Hawkins’ debut thriller is getting a lot of attention, and for good reason. 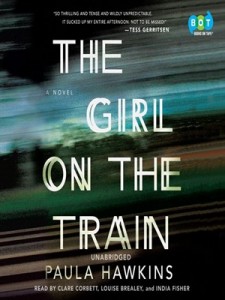 When the blurb on the box calls Paula Hawkins’ debut novel “Hitchcockian,” it is not indulging in hyperbole. The Girl on the Train is a gripping psychological thriller, replete with surprising plot twists, not to mention a growing sense of danger.

This is a well-written book that should delight those readers/listeners who like to venture into the psyches of troubled people and the dark worlds that often lurk behind “normal” facades. Be warned, however: If you’re the sort of reader/listener who wants to like a story’s characters, especially the leading ones, you might be tempted to give up in disgust before you reach the surprising climax.

The story – the increasingly tangled mystery – is compelling, made more so as you gradually realize that few things are what they seem, and none of the narrators can be trusted. But those narrators, in addition to being unreliable, are exasperating and often unattractive. Their motives are questionable, and their decisions are often bad.

When an author writes about such unappealing characters, she has to hope that readers will be so caught up in the complexities and mysteries of the plot that they will stick with the story even if they don’t much sympathize with the people in it.

That’s why I found “The Girl on the Train” a particularly good choice to listen to as an audio book. Had I been reading a printed novel, I might well have given up on these people, especially the primary narrator, Rachel, before the thriller offered enough danger and complexity to make me keep turning pages. Why should I spend my time with a woman who lies to everyone, including herself, and drinks so much she blacks out and can’t remember what she did?

But the three skilled women giving voice to Rachel and the other two leading female characters drew me in so that I kept going, partly out of curiosity and partly out of a growing desire to know the truth of the matter.

Rachel rides the commuter train daily from her suburban flat where she rents a room from a college friend to London. The train passes right by the suburban house where she used to live with her husband, the house where he now lives with his new wife and their baby. The train goes slowly along this stretch, usually stopping for several minutes at a malfunctioning signal. She can look into the houses and back gardens, where the residents seem oblivious to any watchers on the passing trains.

A few doors from her former residence, Rachel notices a young couple living in a house very much like the one that was her home. Envious of what she believes to be their ideal world, Rachel calls them “Jason” and “Jess” and invents life stories for them. They seem to have everything that she has lost.

Rachel’s also obsessed with her former husband, Tom, and his new wife, Anna. Unable to let go, she often calls him after she’s had too much to drink, and sometimes she shows up at their doorstep, infuriating and frightening Anna, who comes to loathe Rachel.

Then one day, from the train, Rachel sees “Jess” kissing a man who isn’t “Jason.” The next day, “Jess,” who we learn is really named Megan, goes missing, and soon her disappearance is all over the news. Although Rachel can’t remember what she did or saw the night Megan disappeared, she does know that she was in her old neighborhood, and that she was very drunk.

And she does remember seeing Megan with the other man the day before, a sight that destroyed her fantasy of the perfect world of “Jess and Jason.”

Rachel becomes obsessed with figuring out what happened to Megan. The story progresses through the alternating viewpoints of Rachel, Megan and Anna. Rachel has the main role, but Hawkins skillfully weaves in accounts by the other two women.

Literate, written with impressive insights into how people justify their actions to themselves, the book becomes more than a thriller. It’s a book about memory and perception, about how things and people are often not what they seem, and about the importance of what we believe – even if it’s something less than the truth. Even if we can’t be sure what truth is.

This entry was posted in Audio Books, Contemporary literary fiction, Thriller/Suspense and tagged British fiction, Paula Hawkins, The Girl on the Train, thrillers. Bookmark the permalink.