Take an ambitious, needy girl, throw in a few naive young men, add a plot for an improbable heist plus adventures on two continents, and you’ve got an impressive first novel. 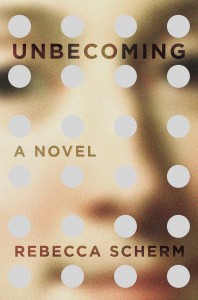 I sometimes wonder about the people who don’t play by the rules – the scammers, the thieves, those who take advantage of others in one way or another. How do they justify themselves to themselves?

In her intriguing first novel, Unbecoming, Rebecca Scherm does a convincing job of taking us inside the mind of one of those people, and it’s not a happy place to be.

Grace, in her early 20s, lives in Paris. But it’s not the glamorous life she dreamed of a few years ago. Having cut nearly all ties with her past in a small Tennessee town, she calls herself Julie and says tells the few people she deals with that she’s from California. She works at a questionable antiques shop, mending and restoring odds and ends – pieces of china, family heirlooms, sometimes jewelry. She rents an inexpensive room from a disapproving woman. She has no friends, until she opens up a little to another woman who works at the shop. Whenever she can, she checks the website of the newspaper in her hometown of Garland.

Deftly, Scherm takes us back and forth from this present to earlier times in Grace’s life, times that helped to shape the person she is now. We learn about her troubled childhood, her early romance with a boy from a “good” Garland family, her time at college and in an utterly unfamiliar art and social scene in New York City, her early days in Europe…

Grace is on edge because two young men who once were very close to her are about to be paroled from prison back home. The “boys” have spent three years behind bars, and Grace has spent three years trying to disappear. She knows a lot more than she should about their crime that went wrong, but no one has said anything about her involvement.

Grace loves the objects she works with, and the ones she can find at markets around Paris. She loves them for themselves, not for what they might ever have meant to the people who once owned them. People are much more problematic.

This is a fascinating story, and Catherine Taber’s reading in the audio version brings the complexities of Grace’s nature to life with believable poignancy.

Sometimes, it’s difficult to read a book when the main character is not someone with whom you’d want to spend time. But through Scherm’s skilled writing and Taber’s haunting voice, Grace gets into your heart before she disappoints and even infuriates you – much as she does with other characters in the story. Our feelings for Grace change as often as does her sense of her own identity.

I found myself half rooting for her to get away with it (to say what “it” is would be to tell too much), and half hoping she’d get what she deserves.