A step back in time

For 16 novels, Charles Todd has brought us the detective adventures of Ian Rutledge, who returned to police work at Scotland Yard while battling the lingering effects of his time as a British officer in World War I.

Now, the mother-son writing team that is Todd brings us a prequel: The newest novel steps back to the summer of 1914, when the storm clouds of war gathering over Europe were casting their shadows in England. 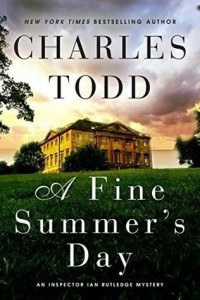 June 1914: Ian Rutledge, a young inspector at Scotland Yard is about to ask the woman he loves for her hand in marriage. He neither knows nor cares that an archduke has been assassinated in Sarajevo.

Events triggered by that shooting, however, will eventually have a profound effect on the world – and on Rutledge.

In one of the best Ian Rutledge novels yet, Todd has Rutledge doggedly trying to solve several murders or suicides in various locations around the British countryside. The more he digs into what appear at first to be separate incidents, the more he believes that something links the killings – something that might result in even more murders if he doesn’t act quickly enough.

Todd does a masterly job of balancing the immediate and the more distant problems that mar this fine English summer. Despite opposition from his boss at the Yard, Rutledge pursues the similarities he begins to detect in the unexplained deaths. His new motorcar enables him to travel from village to village, and some good detective work eventually leads him to the apparent link.

Meanwhile, there are undercurrents about his fiancé, Jean. The other women in Rutledge’s life are not as sure as he is that Jean will settle happily into the role of policeman’s wife. Her reactions when Rutledge must be away from London in his efforts to solve the murders suggest that the doubters might have a point. Despite having grown up the daughter of an officer, she also has an unrealistically romantic view of the military and war.

The situation in Europe becomes increasingly dire. When England is forced into the fray, Rutledge resists the excitement that propels many other young men to sign up for what they are sure will be a short but glorious war. He’s a policeman with important cases to solve, he insists. He’s already seen more bodies than he wants to. Let those who are trained to be military leaders do their job.

Knowing that Rutledge will not be able to stay out of the war, readers of the series will find his emotional struggles all the more poignant. Todd handles the stresses and conflicts deftly.

This is a strong book, taking us to England in the early days of the Great War that will wreak such profound changes on Rutledge and those around him.