Here’s the latest in a long-running crime-novel series. Don’t worry if you missed out on the earlier books. You can always go back and enjoy them, too. 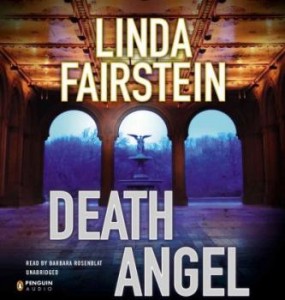 Alex Cooper, an assistant district attorney in Manhattan, is called in to help solve the mystery when the naked body of a teenage girl is found in Central Park, a heavily patrolled and beloved area that’s not often the scene of major crimes. As Alex and her police friends work to solve the case, they find possible connections to cold cases and long-buried secrets.

This is the 15th in Linda Fairstein’s popular series of mysteries starring Alex Cooper. There’s a continuing storyline involving Alex’s romances and personal life, plus that of her close friends, one of whom – Detective Mike Chapman – is often on the brink of becoming significantly more than just a friend. Each book does stand on its own as a complete mystery, however, and Fairstein works in enough references to the past so the first-time or occasional reader isn’t lost.

In real life, Fairstein was the chief of the Sex Crimes Unit of the DA’s office Manhattan for more than 20 years, so she knows her material when writing about domestic violence and sexual assault.

While each mystery is fresh and complicated, and the circumstances of Alex’s life change, the books do, understandably, have some constants. Some are small details, such as the way the friends vie to answer the Final Jeopardy! from the nightly show.

Others involve style. Fairstein has a penchant for using her characters for exposition, resulting in some dialogue that is wooden and unrealistic. Her characters at times come across as tiresome know-it-alls, though to be fair, Fairstein has established their competitive natures. Somehow, listening to Barbara Rosenblat’s skilled reading in the audio version makes the dialogue flow more smoothly than it does on the printed page.

A related Fairstein trademark, one that necessitates much of the expository dialogue, is her working extensive information about a place or landmark into the story. This time, it’s Central Park, which has a fascinating history and a lot going on behind the scenes. As a bonus, we have the Dakota, the venerable apartment home of many of New York’s rich and famous. Both are fascinating places, and in Fairstein’s skilled hands they came alive and were as interesting as the book’s human characters.

Just to complicate things, a scandal threatens the careers of Mike and Alex, and a lurking criminal has a grudge against Alex.

All in all, this is Fairstein at her best, a book well worth the listen.